Adding joy to life through dance 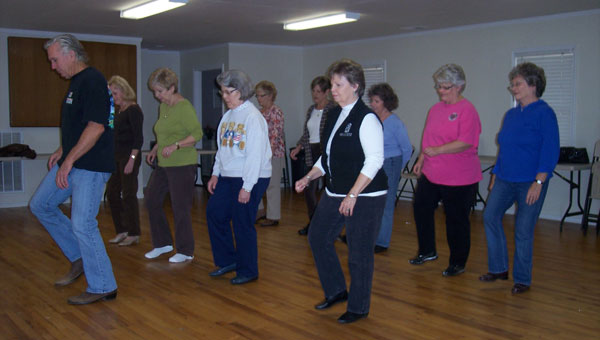 DeWaine Jones enjoys the music and social aspects of line dancing, he said, but the thing he enjoys most is seeing others learning and having fun dancing.

And this is just what he’s doing as instructor of Chelsea’s new line dance class.

“Dewaine makes this class fun as well as a learning one,” said Jean Tate.

“I believe in everyone enjoying life, and dancing adds to that joy,” Jones said.

He once taught Cajun dance at Camp-Smile-A-Mile for children transplant patients. And he tells another interesting story about an older woman at the American Legion in Gulf Shores:

“An older lady using a walker comes over to where I am sitting near the band with my brother. She points at me and says ‘You’re DeWaine from Birmingham!’ I had danced with her a couple of years before and she remembered. I told her to go put up her walker and let’s dance. She did and we danced very carefully. A little while later one of her daughters that was with her from Las Vegas, comes over and whispers to me ‘Just wanted to let you know that mother has stage-4 breast cancer. We appreciate you dancing with her.’ I danced with her and her daughters the rest of the night and when they were leaving they told me how much fun their mother had dancing with me. Probably the last time she danced.”

Jean Tate said there are between 10 and 15 people who come regularly to the Chelsea line dance class. Some who live in Chelsea were going to other areas for classes when they decided to start a class in their own community. So when Jones agreed to teach the class at no charge they grabbed the opportunity.

“Everyone is so pleased with him as a teacher,” Tate said.

Although the Chelsea class has some experienced dancers, it’s geared to beginners.

So, if you are looking for a way to take off a few of the pounds you put on at Thanksgiving, while learning something new, mixing with people and adding a little joy to your life — at no charge — you might want to try Chelsea’s new line dancing class.

It meets each Thursday afternoon 2-3 p.m. at the Chelsea Lodge located on Highway 36.

By SHELBA NIVENS / Community Columnist Gladys Sherrer’s inspiration for her new novel has been the 500,000 children abandoned annually... read more