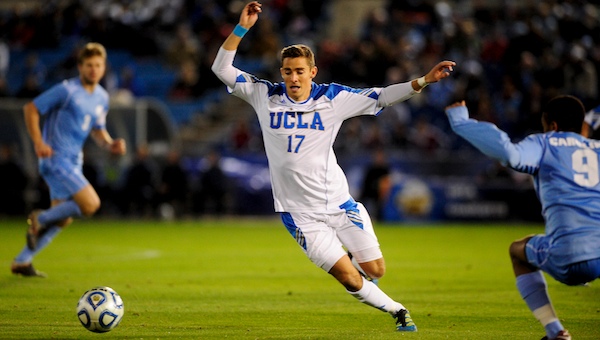 Former Oak Mountain High School boys' soccer standout Chandler Hoffman, a junior at UCLA, chases down a ball Dec. 9 in the Bruins' loss to the University of North Carolina in the 2011 College Cup at Regions Park in Hoover. (Reporter Photo /Jon Goering)

Hoffman came to help his UCLA teammates compete for a National championship in NCAA Division I men’s soccer.

It didn’t keep the former Oak Mountain High School boys’ soccer standout from taking a moment here and there to soak up the enormity of the scene.

Hoffman, after all, was the main reason many of the announced crowd of 9,623 showed up for a doubleheader of College Cup matches. Hoffman looked around the stadium and saw many faces that resembled his just a few years back.

“I saw a lot of young kids out there tonight,” said Hoffman, who received the loudest applause of any player at the College Cup during pre-game introductions when his name appeared on the video board at Regions Park. “Hopefully, they’ll be able to play here one day.”

Hoffman’s maturity stood out with his ability to reflect on his trip back home just moments after the Bruins’ heartbreaking 3-2 loss to the University of North Carolina following a grueling 110 minutes of regulation and overtime soccer and a round of penalty kicks, which sealed the UCLA defeat.

Hoffman, who recorded an assist on each of the Bruins’ goals in regulation, wasn’t able to be a factor down the stretch after battling leg cramps in the final minutes. The Bruins couldn’t muster many opportunities with their leading scorer, a 6-foot, 160-pound junior striker, on the bench.

UCLA saw a couple of scoring opportunities in the two overtime sessions, but couldn’t capitalize. North Carolina keeper Scott Goodwin made a few critical saves in the penalty-kick round to end the Bruins’ hopes of their first National championship since 2002.

“It’s really hard to swallow right now,” Hoffman said. “We were one play away.”

Hoffman made his mark on the match midway through the first half. Hoffman fed the ball ahead to teammate Ryan Hollingshead, who blasted a shot from 30 yards out from the right side of the penalty box into the back of the net to give UCLA an early 1-0 lead in the 16th minute of the match.

Hoffman was given a hand as he trotted off the field for a break from the action with five minutes remaining in the opening half. His Bruins carried a 1-0 lead into the locker room at halftime with help of his assist on their first goal.

North Carolina netted the equalizer in the 11th minute of the second half when Rob Lovejoy sent a header past UCLA goalkeeper Brian Rowe from the right side of the penalty box off an assist from teammate Ben Speas from his left side.

Hoffman again played a role in the Bruins’ second goal. Hoffman received the ball from teammate Kelyn Rowe and sent it back to him in a quick give-and-go from the top of the penalty box and Rowe blasted a shot into the back of the night from the right side of the box to give UCLA a 2-1 lead in the 74th minute of the contest.

The Tar Heels tied the match at 2-2 following a goal by Billy Schuler, who netted a rebound shot in the 84th minute to send it into overtime.

Despite the loss, Hoffman couldn’t have dreamt of a better end to what could be his final collegiate season. Hoffman led the Bruins with 18 goals this season, which earned him recognition as one of the top men’s soccer players in the nation.

“It’s been incredible being back in my hometown,” Hoffman said. A lot of my friends and family we’re able to come out and see the hard work I’ve been doing at UCLA pay off.”

Hoffman, who has one season of collegiate eligibility remaining, is projected to be a top-15 pick in the upcoming Major League Soccer draft next month. Hoffman said he is taking a wait-and-see approach about his final season at UCLA.

“I’m going to have to see what opportunities are presented over the next couple of weeks,” Hoffman said.

North Carolina advanced to play the University of North Carolina at Charlotte, which defeated Creighton 1-0 following a 4-1 advantage in penalty kicks after a scoreless tie during 90 minutes of regulation and two 10-minute overtime sessions in the first semifinal match Dec. 9, in the National championship match Dec. 11 at 3 p.m.

Matt Wallace, a 5-foot-9, 150-pound senior midfielder for UNC-Charlotte, played at Briarwood Christian School before embarking on his collegiate career.

Wallace played in only one match during the season for the 49ers and did not play in the semifinal match against Creighton.

Wallace redshirted as a freshman before playing in 12 matches in his first season in 2008. Wallace’s first shot at the collegiate level was a goal against the University of Central Florida.

Wallace spent the 2009 season at Jacksonville University before transferring back to UNC-Charlotte to finish out his playing career.

Cat Whitehill, formerly known as Cat Reddick, served as the sideline reporter during the nationally-televised broadcast of the semifinals on ESPNU.

FROM STAFF REPORTS The University of Montevallo women’s soccer team was recently awarded one spot on the National Soccer Coaches... read more