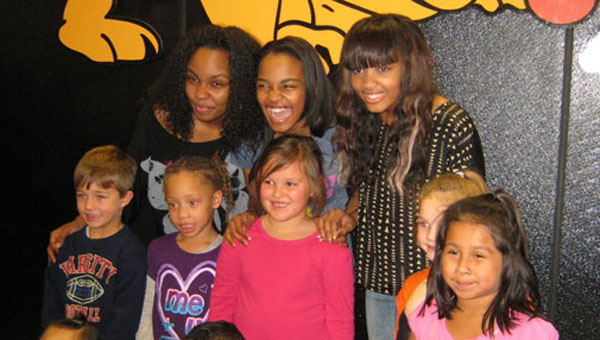 By CATHERINE LEGG / Special for The Reporter

MONTEVALLO – Montevallo Elementary School was rockin’ and rollin’ last Friday afternoon when the kids had a surprise visit and performance by the Disney Channel star China Anne McClain and her sisters, Sierra and Lauryn.

You couldn’t tell who was more excited; the kids or Grandma McClain, principal of MES. Grandpa Johnnie, retired principal of Montevallo Middle School, was there too, tapping his toe to the music and grinning with pride.

“I still just can’t believe it,” he said. “It’s like a dream when I see our grandchildren on stage and on TV, hear them sing and see them perform. They are famous, and it all happened so quickly.

The school children could believe it, though; they all knew China Anne, and they all knew her songs. They sang along, clapped their hands and waved their arms to “Calling All The Monsters,” “Dynamite” and the other songs.

The kids had a wonderful time, and it was obvious that China and her sisters did, too. She told the children repeatedly that they were the greatest audience ever, and once between songs she called out, “Grandma, I love this school. Can I go here?”

Dr. Annie McClain was sitting at the edge of the stage during the performance when China ran over and, joined by her sisters, hugged their grandmother and told the school children, “We love our grandma; she’s the best grandmother in the whole world. You all be good to her.

The star is 13 years old, the youngest of the three girls. She comes from a very artistic family: Her father, Michael, son of Dr. Annie and Johnnie McClain, is a music producer, and her mother, Shontell, is a vocalist and songwriter. The girls’ younger brother, Gabriel, also acts, sings and dances.

China has appeared in several movies and became nationally known when she joined the cast of the series, “Tyler Perry’s House of Payne,” as Jazmine Payne. She is perhaps best known as Chyna Parks, the star of the Disney Channel original series “ANT Farm,” where she plays along with Sierra McCormick and Jake Short.

Some of China’s popular songs, in addition to “Calling All The Monsters” and “Dynamite” are “Beautiful,” “My Crush,” “Unstoppable” and “Exceptional.”

After each of two performances in the MES cafeteria, China, Sierra and Lauryn greeted each student and posed for pictures with them in small groups. Later, each child will receive a picture signed by the three girls to help them remember this very special day.