Give a bit of Hometown History 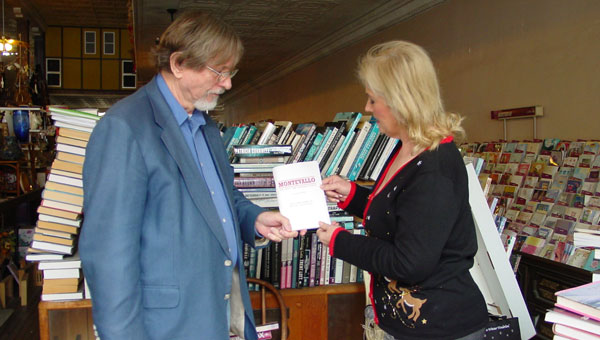 Looking for the unusual Christmas gift? What better than that of a bit of Montevallo history! Few stories and books have been written of the early days in the town, but we found five for your Santa list.

The Montevallo Historical Commission offers “Montevallo – The First One Hundred Years” by Eloise Meroney, along with “Other Stories of Historic Montevallo.” This is factual history and a rare treasure; Meroney was a life-long member of the community and an instructor at the University of Montevallo. Her book was published in 1977, sold out, and was not reprinted until last year. It is available for $15 at Eclipse Coffee and Books, the House of Serendipity, and Parnell Library.

“Images of America – Montevallo” is a beautiful pictorial history of UM and the Montevallo community by UM Professor Clark Hultquist and Assistant Professor Carey Heatherly.

“We wanted to capture the transformative effect UM has had upon tens of thousands of students,” said Heatherly, “along with the bucolic nature of our town. We hope the book’s lasting impact lies in the views and commentary of town and institutional history, allowing alums and residents to reminisce.” Copies are available at $21.99 from The Eclipse, Serendipity and major book stores in the area.

A recent publication is “Artistry of Wonder,” a compilation of the photographic art of Frank Harrison. In 1978, Obie and Sheror Moore purchased the 1887 Harrison house in Dogwood. Their son, Jim, discovered in the attic of that house 223 rare glass negatives of photographs taken by Dr. Harrison’s son. All of the photos are presumed to have been taken in the Dogwood area during the early 1900s. Jim has put together 40 of these wonderful photographs in an effort to preserve the history and to expose the artistic talents of the photographer. The book is a “steal” for history buffs and art lovers at $10, and is available at Moore Brothers’ Automotive Service (665-1099).

A must for home libraries is local historian Henry Emfinger’s “From Wilson’s Hill to Montevallo, Alabama,” a collection of stories and photographs depicting the early days in Montevallo. This little book was published in 2005 and there are only a few copies left, but you might talk Henry (665-2886) into selling one. The price is $22.

“The Story of My Hometown” was written about Aldrich by Emfinger. The history of Aldrich is an important facet of Montevallo’s past. It was a coal mining community and was representative of the vital mining industry of that day. The book can be purchased for $5 at the Aldrich Coal Mining Museum.

Maybe even old Saint Nick would like one of these books in his stocking.

Butterworth to retire from Alabama Power

By BETH CHAPMAN / Community Columnist After 34 years of exemplary service and outstanding leadership, Debbie Butterworth is retiring from... read more