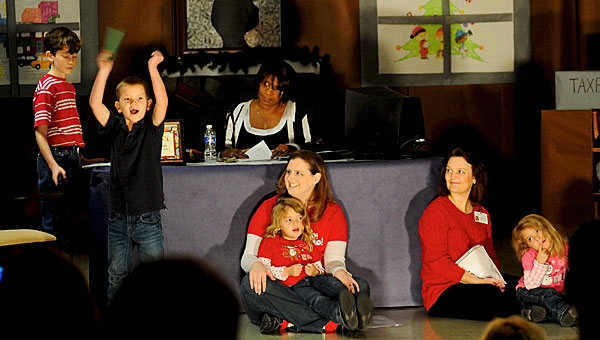 Students and teachers at the LNLC put on their CHristmas production on Dec. 16 in Pelham. This year's production was "A Christmas Carol." (Reporter Photo/Jon Goering)

Students at Pelham’s Linda Nolen Learning Center transported a full auditorium of spectators through Scrooge’s history, present and future Dec. 15 during the school’s production of “A Christmas Carol.”

Nearly every student at the school had a part in the Christmas performance, which is held at the school every year a few days before the holiday break.

The play chronicled the transformation of “Cecelia Scrooge,” who was portrayed by LNLC secretary Cecelia Woods. At the beginning of the play, Scrooge was an outspoken opponent of Christmas, but was spreading the holiday joy after receiving visits from the spirits of Christmas past, present and future on Christmas Eve.

“The kids really did a great job with it,” Woods said. “I was just there to help them, but they are really the ones who put it together.”

“Our students and parents put in a lot of work to get ready for today,” said LNLC Assistant Principal Sharyn Hillin.