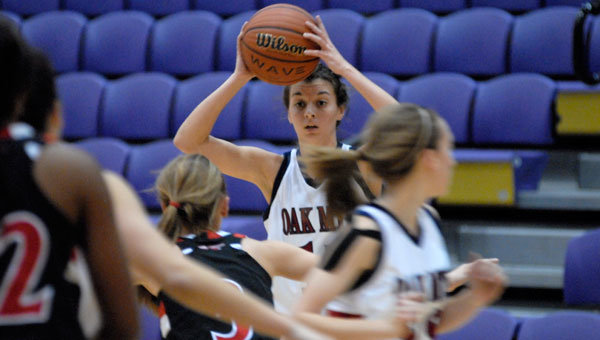 Oak Mountain High School senior Maegan McDanal looks for an open teammate in the Eagles' victory over the Warriors in the Shelby County tournament semifinals Dec. 19 at Bank Trust Arena on the University of Montevallo campus. (Reporter Photo /Wesley Hallman)

Madison Pierce and Maiya Lee led the Eagles (10-3) with 11 points each in the victory.

The Eagles took their first double-digit lead of the game midway through the second quarter before Thompson went on a 9-0 run late in the first half.

Lawley had a 3-pointer and a layup before Stowes scored a basket with 18 seconds remaining in the second quarter to cut the deficit to 16-15.

Lee scored a basket with six seconds left on the clock in the first half to push the Eagles’ lead to 18-15 heading into the locker room a halftime.

Oak Mountain extended its lead to eight points, 27-19, with 1:21 left in the third quarter following a layup by Lee.

The Warriors cut the deficit to 27-21 heading into the fourth quarter following a steal and a layup by Kat Cingoranelli with 55 seconds left in the period.

Thompson opened the fourth quarter with a 4-0 run following a putback by Sophie Cingoranelli and a pair of free throws by Lawley to cut the deficit to 27-25 with 7:28 remaining in the game.

The Eagles responded with a 10-1 run, capped with an offensive rebound and putback by Pierce with 3:12 left in the game, to take control down the stretch.