Echelon Catering has presented chef demos at the past two seasons of Helena Farmers Markets and to honor the spirit of the solstice, I recently asked Chef Gray Byrum to concoct a meal with a seasonal theme.

Byrum said duck is one of his favorite dishes and though some people consider it too fatty, the secret to releasing some of the fat is to deeply score the breasts before cooking. He marinades the breasts in soy sauce, Worcestershire sauce, Dijon mustard, rosemary and garlic.

Byrum begins by searing the breasts on stove top in a bit of olive oil, allotting 75 percent of the cooking time to the skin side, then briefly turning to the other side before inserting the breasts and pan into the oven for about eight minutes to roast. 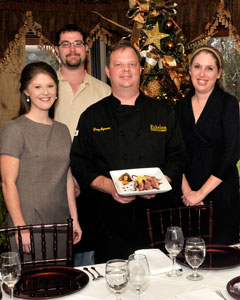 After the breasts are removed from the oven, they are placed on a plate to rest a few minutes before serving. This ensures that the rareness, which Byrum prefers, is evenly distributed.

On the side he serves a risotto, prepared with white wine, to which roasted butternut squash is added.

“This gives a nice inherent sweetness which goes beautifully with the duck.”

Last into the risotto go a dollop of butter and generous handful of parmesan.

Alongside is chunky, brandied chutney of pears, raisins and celery.

“Since there is fruit in the meal, a flourless chocolate cake would be my choice for a desert,” Byrum said.

Byrum said he was hooked from the first day of beginning his classical training at the Winfrey Hotel with executive chef Kenneth McNeilly. He has since worked for the Hyatt Corp. and Disney Resort, among others, and his culinary experiences have allowed him to travel to Spain, France, Italy and the Far East.

During our tasting session, I asked the foodies at the table what they might choose for a last supper.

Byrum said, “I would request roasted squab — it’s darker than duck, a little gamey which I absolutely love, with toasted juniper berries, deglazed with gin and beef or veal stock for the sauce, foie gras and mashed potatoes.”

Danielle Dunsker, Echelon’s director of marketing and events, said she would have scallops with Byrum’s gnocchi, which is different from the Italian recipe as it uses a base of papachu.

“When I am having a bad day, I crave fried chicken and mashed potatoes, like a good Southern girl should,” said Amanda Baker. “And your last supper would definitely be a bad day, I would think!”

Brian Hinds and Billy Smith descend to the entry of Eureka No. 4 mine shaft as Brian Wallis cleans away... read more