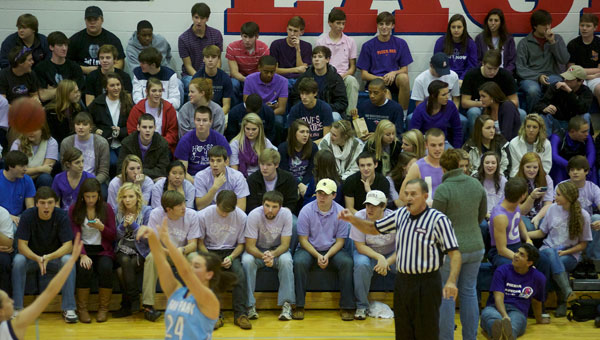 Many Shelby County residents will dig deep in their pockets to contribute money, clothing and toys to Christmas charities for underprivileged children this holiday season.

They will also give to another important cause during basketball games at Oak Mountain High School and Chelsea High School when Christmas spirit is at its peak.

The two schools each host a Hoops for Hope event during the month of December to raise funds in advance of Relay for Life campaigns in Shelby County in the spring.

Members of the school’s Relay for Life committee got the word out in the North Shelby community about the game and sold T-shirts and took up donations, which will ultimately benefit the American Cancer Society’s campaign to fight cancer.

“The kids do a wonderful job spreading the news about the event,” said Oak Mountain High School Relay for Life sponsor Donald Clayton, who is also an assistant principal at the school. “It’s a really neat thing. They take ownership of it. The atmosphere the night of the games is not only vibrant, it also has a community spirit to it.”

Clayton said the fundraising efforts are driven by students on the Relay for Life committee at Oak Mountain.

“The kids on our Relay for Life committee plan and organize everything,” Clayton said. “It’s our opening fundraiser for the spring Relay for Life event. It’s very important to our school and community.”

Clayton said students at the school and the Oak Mountain community first got behind the idea about seven years ago, when former boys’ basketball coach Jerry North battled cancer. North’s cancer went into remission and he retired in 2007, but the school has kept its effort going while several students have had their own bouts with cancer.

“It really kind of started back when Coach North battled cancer,” Clayton said. “The passion among the students and community all started then. We’ve also had a few students here and there who’ve been through it. It means a little more to our community.”

Clayton said the school has been able to raise several thousand dollars in the past three years alone. The money helps get the spring campaign off the ground, Clayton said.

Chelsea decided to make its Hoops for Hope campaign a three-day event. The Hornets will also sell T-shirts and take up donations Dec. 29-31 during its Hoops for Hope tournament, which will also include county rivals Calera and Montevallo, along with Childersburg, Cordova, Fort Payne, John Carroll Catholic and Pleasant Grove.

During halftime at games in last season’s tournament, cancer survivors and friends and family of those who lost their battle left messages and memories to loved ones on a banner hanging on the gym walls.

Chelsea girls’ basketball coach Wayne Trucks said the inaugural campaign in Dec. 2010 was a huge success. He thinks the school can surpass its fundraising goal this winter.

“Last year we donated over $5,000 (to the American Cancer Society) through Hoops for Hope,” Trucks said. “We hope to increase that amount this year.”