Soon there will be a new face at O’Charleys, but it is really just that old Alabaster guy John Mark Collins who has come home.

He was quite the little trickster, however. The time he took his car to Panama City, Fla. (against his mother’s wishes) he had a wreck. Summers spent clowning and hanging out at the Alabaster pool are good memories. 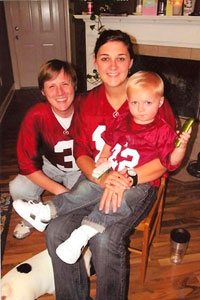 While attending the University of Alabama, Collins met future wife Meggie through a mutual friend. Later, while Collins was working in Starkville, Miss., they decided to get married in April of 2008 in Mandeville, La., which is Meggie’s hometown. Meggie still works in the school system there with autistic children, and will remain there until baby Caroline is born in April.

Their son, Mac, is now 2 years old. Being separated by distance is not fun, but Collins really wanted to get back home.

“Meggie and I are best friends and we will make this situation work,” Collins said. “When the baby comes, O’Charleys will be cooperative with paternity leave.”

Collins is adored by several nieces and nephews. “We are building better relationships now that I am back home. Soon our family will be complete,” he said.

The current economy is certainly affecting the restaurant business, so Collins is determined to give service that is prompt and courteous along with food of good quality and portion.

“I like to be greeted with a smile, good attitude and respect and our customers deserve no less,” he said.

The golden rule applies everywhere in Collins’ opinion. Previously employed as a manager for Chili’s in Starkville, Cafe Venice in Tuscaloosa and a general manager for the Times Grill in Mandeville, La., Collins feels ready to put his experience to work in his hometown. He will have to manage, supervise and sometimes even cook. A manager has to know it all.

Beaches are favorite Collins family retreats…any beach will do. Alabama football and golfing are Collins’ other favorite pastimes.

The best thing about coming home, Collins said, is “Family, food, friends and hills. (it is so flat in south Louisiana). My heart is in Alabama.”