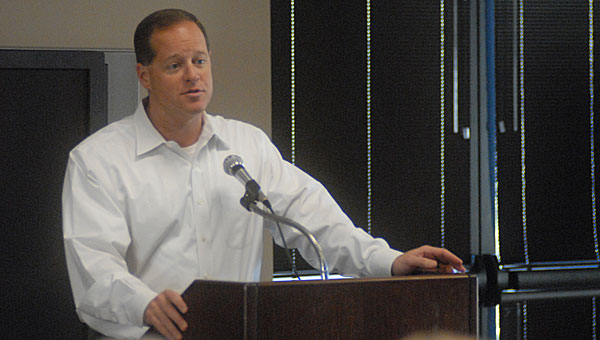 The state may be in a “deep hole” in the next few years if Alabama officials do not address the state’s prison overcrowding situation soon, state Sen. Cam Ward, R-Alabaster, told a group at the Pelham Senior Center on Jan. 5.

Ward, who was the center’s pre-lunch guest speaker, told the seniors Alabama soon could face a scenario similar to the one California faced a few years ago.

“The prisons were 180 percent overcrowded in California, and the federal government stepped in and made them release a bunch of inmates,” Ward said. “Right now, Alabama has 193 percent overcrowding.”

Ward said the Alabama Legislature has “kicked (the prison overcrowding issue) down the road for years,” but said the state will face a costly lawsuit if it does not address the issue in the coming years.

“If we don’t deal with it in the next two years, we will face a multi-million-dollar lawsuit and we will lose and thousands of violent inmates will be released by the federal government,” Ward said. “It would be a hole we will never be able to dig out of.”

Ward said building more prisons to house the inmates would not be cost-effective, and said supervised, offender-funded rehabilitation programs for drug and other non-violent convicts could help curb the overcrowding problem.

“We’ve got to be smart about drug courts and first time offenders,” Ward said. “I think we should put guys who are not a threat into a rehab program they pay for and be supervised by a judge.”

Ward also said balancing the state’s budget could become difficult over the next few years without cutting programs or raising taxes.

“In 2014, Obama care, for lack of a better word, will mean our state will be obligated to take in 300,000 additional Medicaid enrollees,” Ward said. “That, in my opinion, will be one of the biggest challenges you are going to see going forward. It won’t be an easy challenge.

“And nobody seems to have an answer for it yet. A lot of legislators are hoping that congress will reverse some parts of Obama care,” Ward added.