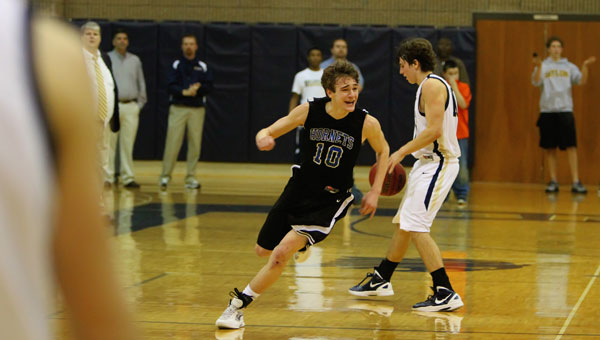 Ganus, the starting quarterback on the Hornets’ football team and a starting guard on the boys’ basketball squad, pledged after the loss to not let his athletic career end without experiencing a win over the rival Lions in his final season.

“I wanted to come out and beat (Briarwood Christian) before my senior year was over,” Ganus said.

Ganus eclipsed the 1,000 career point scoring mark while leading the Hornets with 11 points in a long-awaited win over Briarwood Christian following a 40-38 win over the Lions in an Alabama High School Athletic Association Class 5A, Area 7 contest Jan. 6. 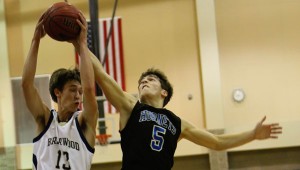 Fellow senior guard Brody Holder scored the game-winning basket with 1.4 seconds left for the Hornets, who topped Briarwood Christian in the regular season for the first time in coach Michael Napp’s six-year career at the school.

The basket capped an eight-point fourth quarter for Holder, who drew praise from his coach following the game.

“What an amazing fourth quarter,” Napp said. “What a fun memory for him.”

Holder said the Hornets planned to try to get the ball to Ganus for a 3-pointer, but the Briarwood Christian defenders didn’t give him any space. Holder took advantage of the extra attention being paid to Ganus.

“It was nerve wrecking,” Holder said. “I just drove to the hole.”

Jason Laatsch, who hit a game-tying 3-pointer from the wing with 15.2 seconds remaining in the game, led Briarwood Christian (10-9 overall, 0-3 in Class 5A, Area 7) with a game-high 17 points. Laatsch also grabbed four rebounds.

Ganus notched his 1,000th career point following a free throw with 4:18 remaining in the first quarter, which led the Chelsea student section to begin chanting “1,000.”

“I couldn’t have done it without my coaches and teammates,” Ganus said.

Woods scored a basket to give the Lions a 9-7 lead with 37 seconds left in the opening period before Ganus knocked down a 3-pointer 11 seconds later to give Chelsea a 10-9 lead after the first quarter.

Ganus converted a three-point play to give the Hornets a 13-9 lead with 7:50 remaining in the second quarter. The four-point margin was Chelsea’s largest lead in the first half.

Briarwood responded with an 8-1 run, capped with a floater in the lane by Lathem, to take a 17-14 lead with 3:22 left in the first half. Laatsch drained 1-of-2 free throws in the final minute of the second quarter to give the Lions an 18-16 lead heading into the locker room at halftime.

Holder drained a 3-pointer and converted a three-point play in the first two minutes of the fourth quarter to give Chelsea a 34-27 lead, its largest in the game.

Briarwood Christian cut the deficit to 35-33 with 4:06 remaining in the game following a layup by Laatsch, who later tied the game at 38-38 following a 3-pointer with 15.2 seconds remaining.

Holder drove underneath the basket and layed it up on the opposite side for the game-winner with 1.4 seconds remaining.

“We could have used Devin’s intensity,” Laatsch said.

Despite the absence of Bowman and his younger brother, Laatsch said the Hornets deserve credit for picking up a hard-fought win on the Lions’ home court.

“It’s a big rivalry game in any sport,” Laatsch said.