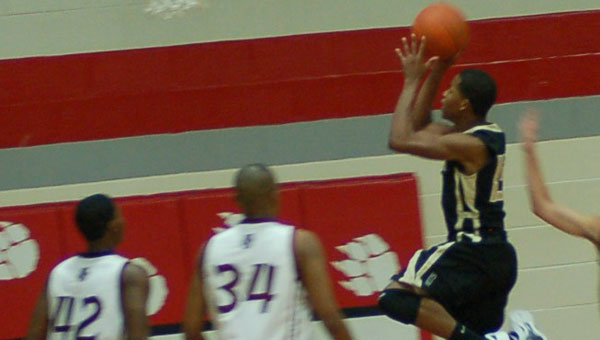 By BRITTANI MORRIS / For the Reporter

Anterio Rogers led the Yellow Jackets (12-5) with 17 points in the victory. Rogers also finished with a team-high nine steals.

The Wildcats began the game with many mental errors, but gained more confidence before half time and showed good ball handling.

“We did pretty good,” said Shelby County sophomore Emmanuel Hall. “We should have done better, but we worked hard.”

Vincent played strong in the paint throughout the entire night and ended the first half in the lead, 32-20.

Both teams found themselves at the free-throw line the whole night shooting foul shots. The aggressive neck-to-neck game kept the fans on the feet the entire game.

“We made a lot of mistakes in the first half, but in the second half we came back,” Jones said. “We gave it all we had, but we ran up short.”

The Wildcats raced out to a 31-11 halftime lead.

“Anytime you have 15 girls on your bench and all 15 girls get a lot of playing time, you have a very good night,” added assistant coach Brookie Harbison.

Shelby County’s Hallie Brown began the third quarter with a left-handed layup to draw the crowd in.

“We have got to work on being more aggressive,” Kyser said.

“I think we stepped it up,” Adams said. “We came out in the first half doing great. Our hard work at practice paid off.”