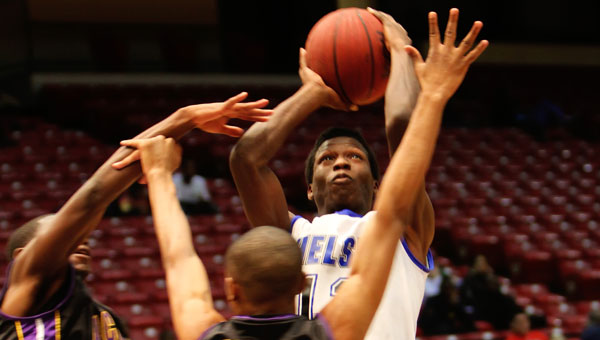 Chelsea High School senior D.D. Washington attempts a shot in the Hornets' 63-60 win over Jackson in double overtime in the Alabama Shootout at the Birmingham Jefferson Convention Complex on Jan. 14. (Contributed/Cari Dean)

Washington finished with a double-double in the win with 18 points and a team-high 12 rebounds in the victory.

Jake Ganus, who was named the game’s most valuable player, led Chelsea (10-11) with 25 points in the win. Ganus, who dished out a team-high five assists, also recorded a double-double with 10 rebounds.

Julius McCall chipped in 10 points in the win. McCall finished a perfect 4-of-4 from the free-throw line in overtime.