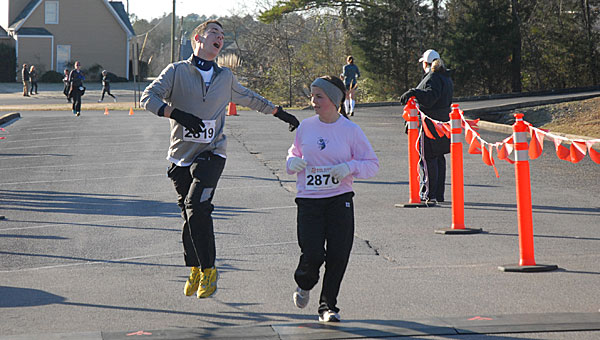 More than 220 runners from throughout the state braved sub-freezing early morning temperatures Jan. 14 as they raced to better health through Alabaster’s neighborhoods.

Evangel Classical Christian School held its annual Snowball Run on and around the school grounds off Thompson Road beginning at 8 a.m.

This was the second year of the event, which is usually held on a winter weekend morning in temperatures hovering around freezing. Temperatures on the morning of the race were in the high 20s as 223 runners took part in the 5K, 10K and 1-mile family fun run.

“We are trying to make this a Birmingham-wide event for runners and families of all ages,” said race organizer Lee Russell, a Helena resident who attends Evangel Presbyterian Church.

“The race is completely a residential course, so it doesn’t go onto any busy roads,” Russell said. “There are a couple of hills, but a lot of the course is flat.”

Russell, who said he has been a runner for nearly 15 years, said he decided to help organize the race last year to give local families and runners a chance to get fit while helping raise money for families in need.

This year, all money raised through the event will be used to fund ECCS scholarships who would otherwise not be able to afford the cost of tuition.

“We decided to put it toward scholarships this year. Because of the economy, there are some families that are struggling right now,” Russell said.

FROM STAFF REPORTS The Hoover Chamber of Commerce recently released the 2012 edition of Hoover Magazine, which features information about... read more