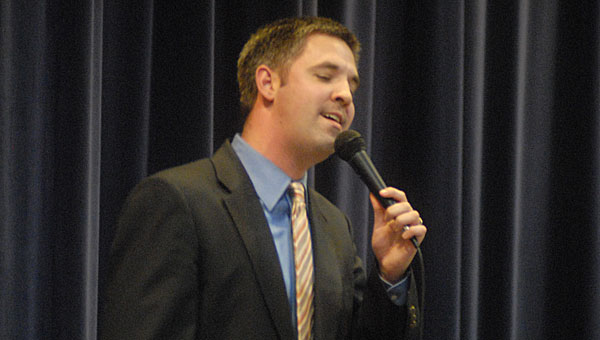 The Creek View Elementary School auditorium was rocking with the sounds of everything from Elvis Presley to the Cha Cha Slide Jan. 17, as the school’s faculty members shared their wide range of talents.

During the faculty talent show, which was the school’s first, teachers representing every department and grade level at the school drew applause from the more than 100 students and parents in attendance.

“The teachers have been working very hard preparing for this,” said CVES Principal Brent Byars. “I’m glad you all get a chance to see their hard work pay off.”

During the show, Byars, whose father served as the minister of music at the First Baptist Church of Alabaster for 24 years, sang the song “Our God,” which Byars said he sang many times at the church.

Wesson said the faculty members who performed in the show spent the past month preparing for it, and noted many of them practiced at the school over the Christmas break.

“I think this really united our faculty and staff. It united them outside the classroom,” Wesson said.

CVES computer lab teacher Marsha Roach donned an old Thompson High School Warrior costume and served as the master of ceremonies, and was involved in some of the performances, including an “evolution of dance” routine performed by about 15 CVES teachers.

In addition to Byars’ song and the Evolution of Dance routine, the show also featured second-grade teacher Somer Miller and her family band, which performed several classic rock songs.

CVES teachers Misty Grillo and Heather Martin, who are sisters and Alabaster natives, sang Miranda Lambert’s song “The House that Built Me.”

Several of the school’s third-grade teachers formed a group called “The Third-Grade Pipers,” and performed songs such as “Winter Wonderland” and “Frosty the Snowman” by striking different length metal pipes.

A group of first-grade teachers acted out what Roach called a “dramatic interpretation” of the play “The Three Little Pigs,” which drew continuous laughter from the kids and parents in attendance.

The group of teachers who dubbed themselves “The Kindergarten Kickers” performed the “Cha Cha Slide” as dozens of kids in the front of the auditorium danced along.

“I think everyone had a great time,” Wesson said. “I know the faculty and staff had a lot of fun doing it.”