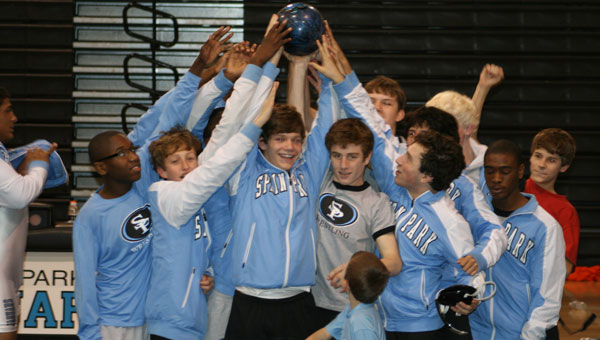 Members of the Spain Park High School wrestling team hold up the coveted trophy for the first time following the Jaguars first ever win over rival Hoover on the wrestling mat Jan. 17. (Contributed)

The Jaguars took away the sentimental bowling ball from the Buccaneers for the first time following a 42-25 win over rival Hoover in the annual “Battle for the Ball” wrestling match Jan. 17.

Spain Park took home the prestigious bowling ball, which is inspired by longtime Berry High School wrestling coach Duke Chimento. Bowling is a passion for Chimento, who was on hand to greet the team captains and participate in the coin toss before the match.

Nine Jaguars earned wins in individual matches against rival Hoover to help Spain Park pick up its first ever wrestling victory over its rival.

Alec Shunnarah of Hoover pinned Alex Potts of Spain Park in 28 seconds in the 182-pound match.