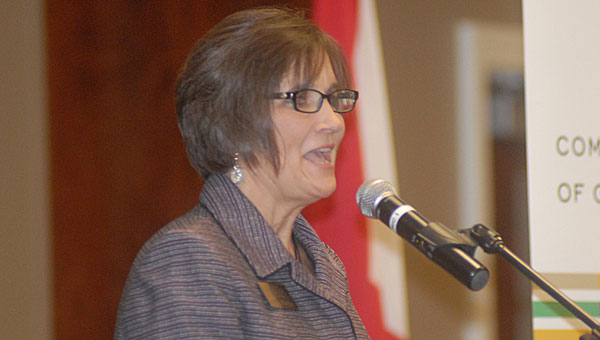 Greater Shelby Chamber of Commerce President Jennifer Whisenant will be stepping down from her Chamber position in February to become executive director of the Birmingham Auto Dealers Association.

The announcement came during the Chamber’s Jan. 25 annual meeting at the Pelham Civic Complex, during which chamber officials seated a new board of directors and looked back at the past year.

Whisenant said the Chamber’s board of directors will meet Feb. 1 to determine how and when the Chamber will fill the vacancy.

“It’s just a way for me to stay involved in the community,” Whisenant said. “They (the Auto Dealers Association) do a lot of community work, and a lot of it goes unseen.

“I think it will be a challenge, but I am excited about it,” she added.

Whisenant has served as president of the Chamber for the past six years, and has overseen the creation of several new Chamber events, such as networking meetings and, Shelby Blues and Barbecue and the annual clay shoot at Selwood Farm.

Whisenant also said she has seen a “tremendous growth” in Chamber membership.

“I have been presented with an opportunity that seems exactly right for me personally and professionally,” Whisenant wrote. “Effective February 6, 2012, I will become the executive director of the Birmingham Auto Dealers Association, allowing me to stay involved with various nonprofit organizations, and also challenging me to grow the Auto Dealers organization.”

Each year, the Auto Dealers Association also hosts the Alabama International Auto Show, which is held at the Birmingham Jefferson Convention Complex.

During the Jan. 25 meeting, the Chamber also introduced its 2012 board of directors.