New OMHS coach approved by board

Hogue thanked the board for approving Bell as a new teacher at the school Thursday night, even though his contractual starting date is in August, so Bell could spend time with his players this spring. Hogue said Oak Mountain is working with the Marietta school system to have Bell at Oak Mountain “two or three days a week” during the spring.

“We’re really grateful to the board for allowing us to have this position,” Hogue said. “This will give the kids stability so that they know who the coach is going to be.”

“We’re just excited for this new start,” Doyle said. “We’re optimistic he’ll fit right in and be a great addition.” 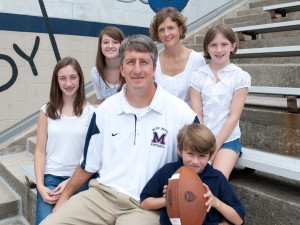 Marietta compiled a 6-6 record last season and advanced to the second round of the Georgia High School Association Class AAAAA playoffs. Bell currently teaches history and physical education at Marietta.

Bell led Strong Rock Christian to two playoff appearances in the school’s first three seasons of varsity competition and was named the Georgia Independent School Association Class 1AA Coach of the Year in 2008.

Bell, who is originally from Richmond, Va., served as the associate head coach and defensive coordinator at Hampden-Sydney College in Hampden Sydney, Va. for five years, where the Tigers had a cumulative record of 34-16.

Bell spent one year as the running backs coach and recruiting coordinator at Carson-Newman College in Jefferson City, Tenn., helping the Eagles to a South Atlantic Conference Championship and playoff appearance in 2004.

In 1999 and 2000, Bell was the head coach at James River High School in Midlothian, Va., where he took a program that had nine wins in the previous five seasons to a two-year record of 15-6 and the 2000 Dominion District Championship.