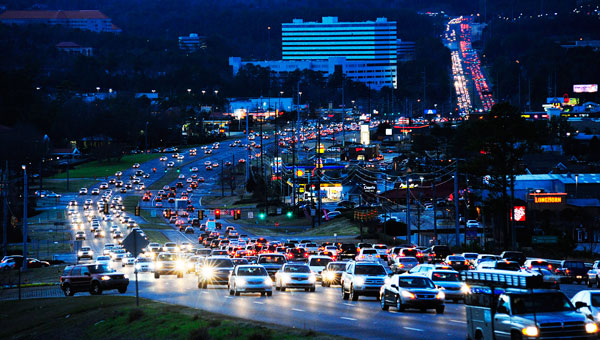 In the spring of 2010, those who regularly travel congested U.S. 280 through Shelby County were hopeful a plan for improving the dangerous traffic corridor was taking root.

It was not to be.

About a year earlier, the Alabama Department of Transportation proposed building an elevated toll road expressway as a solution to U.S. 280’s traffic problems.

However, a small group of business owners and residents, mainly from the Homewood and Mountain Brook areas, objected to the expressway, concerned that it would create an eyesore.

Fast-forward two years, and U.S. 280 is unchanged. Gridlock rules and the elevated toll road plan apparently has been abandoned.

“Until we can better assess the options that are out there and the level of relief we can achieve through the different options available, we’re not at a point to make a decision on how to proceed,” Harris said.

“The way we’ve put it is we are convinced something needs to be done at some point (to improve the traffic burden on U.S. 280). If we can’t find a way to do it, we will leave it at the local government levels.”

He said ALDOT Director John Cooper and Gov. Robert Bentley are “very involved” in those deliberations. “It’s being studied,” he said.

When asked if he could give a timeline for a decision on some type of plan for improving U.S. 280, Harris said, “(ALDOT has put) solutions on the table for 20 years,” but local support for those plans has not been what was needed to move them forward.