Shelby County is having a birthday party! The Shelby County Historical Society, Inc. is sponsoring the 194th Birthday Celebration at the Shelby County Museum and Archives (the “Old Courthouse”) in Columbiana on Sunday, Feb. 5.

Shelby County was created on Feb. 7, 1818 as an act of the Alabama Territorial General Assembly before Alabama was even a state. The former Creek Indian land was ceded to the Alabama Territory in the Treaty of Fort Jackson on Aug. 9, 1814. Alabama did not become a state until Dec. 14, 1819. The county was named in honor of the highly decorated Revolutionary War soldier and Governor of Kentucky, Isaac Shelby. 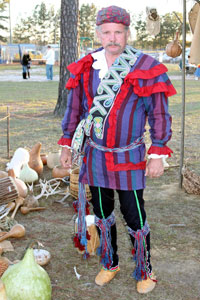 This is the third birthday celebration that is held traditionally on the first Sunday in February. In 2010, the Historical Society sponsored the 192th birthday to coincide with the re-dedication of the Shelby County Museum, which had been renovated with new display cases and artifacts. In 2011, newly elected governor and Shelby County native son Robert Bentley was honored.

For the next six years, the anniversaries will center on the statewide partnership “Becoming Alabama” themes leading up to Alabama’s Bi-Centennial in 2018. The themes celebrate three major periods in Alabama history: The bicentennial of the Creek War and the War of 1812; the sesquicentennial of the Civil War; and 50th anniversaries of major events in the Civil Rights movement.

Shelby County’s 194th birthday celebration will revolve around the Creek Indian Tribe. Robert G. Thrower, Jr., a Tribal Member of the Poarch Creeks and direct descendant of the Wind Clan of the Upper Creeks of Alabama, will lead cultural demonstations from 1-2 p.m. The program will begin at 2 p.m. with Thrower opening in prayer spoken first in Creek language and then in English, dressed in his Native American Creek regalia.

Dr. Edwin C. Bridges, Alabama Department of Archives and History, will be guest speaker on “The Birthing of a State.” Mr. Lee Sentell, Alabama Tourism Director, will talk on the 2012 State Tourism Campaign, “The Year of Alabama Food.” Miss Shelby County 2012 Sydnii Todd and Miss Shelby County Outstanding Teen 2012 Mary Ann McDougal will be honored hostesses. Other honored guests include Shelby County Commissioners, Mayors, and the Greater and South Shelby Chambers of Commerce.

“Many of the things that we do today had their origin in Native American Creek culture in Alabama,” said Bobby Joe Seales, president of the Historical Society. “Rediscover the culture and contributions of our Native Creek Alabamians.”

Stephanie Dikis holding some of her pottery in her workroom. (Contributed) By PHOEBE DONALD ROBINSON / Community Columnist The Fifth... read more