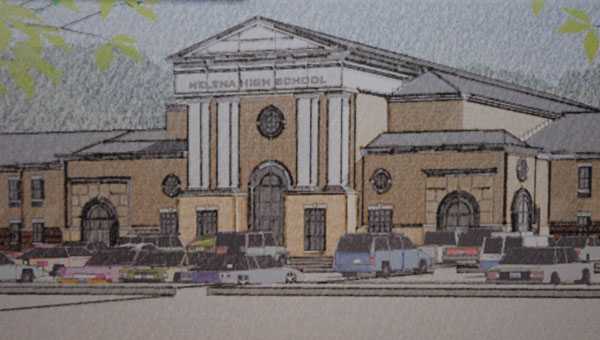 Lee Bryant, an architect with the Lathan Associates Architect firm, presented this rendering of the upcoming Helena High School to the Shelby County School Board during a recent meeting. (Reporter Photo/Neal Wagner)

The Shelby County School System awarded a bid to grade the new high school site on Jan. 31, which is across Hillsboro Parkway from Helena Middle School. Once completed, the school will be 225,000 square feet, will feature a gymnasium, a band and choral room and a football stadium with a track.

“We awarded bids on grading the high school site, so the project, for all intents and purposes, has already begun,” said project architect Lee Bryant, with the Birmingham-based Lathan Associates Architects firm.

The Shelby County School System will fund the construction of the new high school. Helena funded the school’s land purchase, and will fund the athletic facilities at the school through a 1-cent sales tax increase passed in 2011.

The rooms will be able to withstand winds up to 250 miles per hour, Bryant said.

“We are using the band and choral room because of the double benefit it provides,” Bryant said. “The thick walls absorb the sound, and are strong enough to meet the new guidelines.

“Most people will never know this is a storm shelter. Other than some signage and heavy doors, there is no way to detect it,” Bryant added.

The new high school will be able to hold between 1,200 and 1,400 students, and can be added onto in the future if necessary, Bryant said during a Jan. 26 school board meeting.

Elsewhere in the county, Bryant also is handling the design of a new Chelsea elementary school, which will be constructed off Shelby County 337 near the current Chelsea Intermediate/Middle School campus.

Because the new Chelsea elementary school will not have a band or choral room, Bryant said an entire wing of the school will be reinforced to serve as a storm shelter.

By KATIE MCDOWELL/Lifestyles Editor The Shelby County Board of Education approved Brent Tolbert as the Calera Middle School principal at... read more