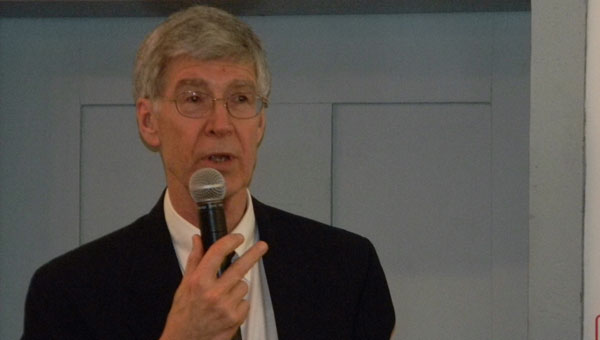 Dr. Edwin C. Bridges of the Alabama Department of Archives and History was the keynote speaker at the birthday celebration. (Reporter Photo/Nicole Loggins)

Columbiana  – Shelby County residents, officials and visitors met at the Shelby County Museum and Archives to celebrate the county’s 194th birthday on Feb. 5.

The county celebrated its 194th birthday with Poarch Creek Indian demonstrations by Robert G. Thrower Jr., and fellowship. The event was organized by the Shelby County Historical Society. On Feb. 7, 1818 Shelby  County was born as a result of the Alabama Territorial General Assembly, one year before Alabama was a state. 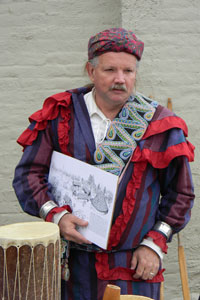 Isaac Shelby would have been proud of the number of attendees who came out to celebrate. The heavily decorated Revolutionary War soldier and former governor of Kentucky is the county’s namesake. Thrower opened the celebration with a prayer spoken in native Poarch Creek dialect. Congressman Spencer Bachus led the Pledge of Allegiance and Probate Judge Jim Fuhrmeister formally welcomed guests to the birthday celebration.

Sydnii Todd, Miss Shelby County 2012, was a guest honoree at the event. Todd said that the birthday celebration was her first time to attend an event in the city of Columbiana.  The self-proclaimed history buff said that she was glad to be a part of the celebration and was looking forward to learning more about the county’s history.

The keynote speaker, Dr. Edwin C. Bridges of the Alabama Department of Archives and History, said that one of the interesting aspects of the county’s birthday is that it is leading up to the bicentennial.

“You can see in our history all these things leading to the creation of Shelby County and the state of Alabama,” Bridges said.

Bridges said that he was honored to be a part of the celebration and gave his commendation to the Shelby County Museum and Archives.  Bridges also mentioned that Shelby County was one of the first counties in Alabama to preserve documents in digital formats.

“Almost everywhere archeologists have dug they have found evidence of the people that were here before them,” said Bridges.

According to Bridges, in the early 1700s, Native Americans were recovering and rebuilding, and Creek Indians began to prosper by selling deer skins to European settlers.

According to Bridges, President George Washington invited many Creek leaders to sign the treaty of New York to prevent war in the Southern states. This was the first treaty the U.S. entered into after Washington was President. Nearly 20,000 Creek Indians we’re living in the unsettled Alabama area at that time. In 1819, representatives gathered and wrote the Alabama State Constitution.

“We’ve got so much to talk about and I want to encourage you to explore your history,” Bridges said.

From staff reports ALABASTER — Harmon D. Acker, 43, of Alabaster, was arrested at about 1 p.m. on Saturday and... read more