A love story for Valentine’s Day 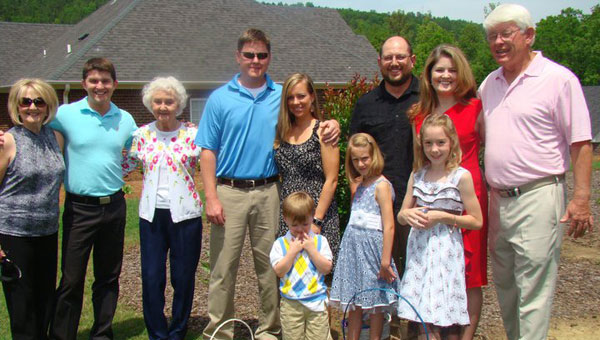 Twenty-year-old Ginger Adams was working part-time evenings at Cobb Theatre at Eastwood Mall while taking a break from teaching dance, to study for a real estate license and try to figure where her life should go from here.

During football season, Ginger told me recently, it was tradition for coaches to do something with the team on Thursday nights, “to make sure players had appropriate meals and got to bed at a decent time.”

“Most Thursdays the coaches would take the boys to a movie,” she said.

So, one Thursday night, as fate (or God?) would have it, Homewood coaches brought their team to Cobb Theatre, where Ginger was working in the ticket booth.

As Jack stepped up to the booth to buy tickets for the team, a chant rose up from the players, “Ask her out! Ask her out!”

With both of them under pressure from the team, he asked her to have a Coke with him after the movie, and she agreed.

“We met at Davenport Pizza,“ she said, “and that was the beginning of our relationship.”

They became engaged in April of 1973.

“When Jack asked me to marry him,” she said, “he asked if I’d rather have a ring or a house. I opted for a house.”

They were married July 21, 1973 and moved into their new home in Irondale, where they lived until they moved to Chelsea eight years ago.

“I loved the feel of Chelsea,” Ginger said, “the churches, the beautiful scenery, especially as you come over the mountain on 280. There was a real warmth here.”

For 17 years, she owned her own studio. She also worked backstage with the Miss Alabama contest, and worked with the Junior Miss organization.

Jack coached for 41 years at several schools around the state. Today, he coaches the girls’ tennis team at Mountain Brook High School.

Members of his football team from 38 years ago claim credit for their relationship, she said. But she gives credit to God.

He brought them together and gave them a beautiful family, she said. “God is the center of our life. And we are more in love now than ever.”

By SHELBA NIVENS / Community Columnist When her mother died and she turned to the wrong things to cope, she... read more