Ellison focused on three major changes. “One of the changes is very positive,” she said. “I’m excited to tell you there is now a new credit for hiring veterans. With 850,000 unemployed veterans and an expected million that will enter civilian life in the next five years, the IRS has issued great tax credits for hiring unemployed veterans.” 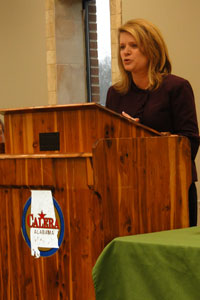 Hiring a veteran who has been unemployed up to four weeks reaps a $2,400 tax credit, unemployed for six months is $5,600.

An unemployed veteran with a service-connected disability is a $9,600 credit.

Ellison said it’s a great opportunity for struggling businesses who need to hire employees, and it includes job training.

Changing gears, Ellison spoke of a negative issue — IRS audits. The IRS has hired hundreds of agents to check businesses who may have employees incorrectly classified as contract labor. Employers pay half the social security of an employee, with contract labor they pay none.

Ellison was contacted by the Alabama Department of Industrial Relations to provide 1099s, W-2s and other financials for a client. She had to justify why people who received 1099s weren’t employees. She said business owners stand 100 percent risk of being audited because the auditor said his intention is to visit every business in Shelby County.

Determining whether a person is an employee or contract labor can involve the set hours, use of tools and equipment and a business license.

An independent contractor must have a business license.

The IRS can collect 10 years of back payroll taxes and the penalty can be as high as the tax. Businesses who may be doing this wrong can take advantage this year of a legislation wherein they report the error, pay only 10 percent of the tax and owe no penalty or interest.

Ellison encourages any business that has any doubt to file a form with the IRS.

Ellison said compared to other years not a lot has changed, but 2013 holds huge changes.

If something doesn’t change with the health care reform, businesses and individuals could be affected by the Medicare surcharge.

Ellison’s office is located in the Airport Commons across from Victory Pontiac. Contact her at 216-0543 or kelly@mystrongalliance.com.