Civil rights play to be performed in local high schools 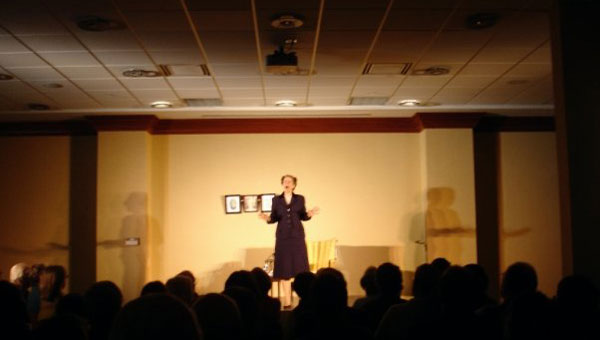 Ginny Loggins performs Too Many Questions: An Evening with Virginia Durr. (Contributed)

“Too Many Questions: An Evening with Virginia Durr” will be shown at each high school. The play is a one-act, one-woman play, based in part on Durr’s letters that documented her associations with Eleanor Roosevelt, Rosa Parks and Supreme Court Justice Hugo Black, according to a press release from the Shelby County Arts Council.

The play was commissioned by the Vulcan Park and Museum in 2009, written by playwright Lee Shackleford and is performed by local actress Ginny Loggins. The Shelby County Arts Council received funding from the Alabama Humanities Foundation, Alabama State Council on the Arts and White Rock Quarries to fund performances at no cost to the schools.

Founder and President of the Shelby County Arts Council, Terri Sullivan said that the play will last for one hour and it is geared towards high school students.

“It’s very educational, they’ll learn about civil rights,” Sullivan said. “I saw it last year and thought it was extremely well done. It’s such a great learning opportunity and I wanted our students in Shelby County to see it.”

The play will be performed at 8 a.m. at Montevallo, at 10 a.m. in Calera and at 1 p.m. in Vincent. According to Sullivan, the performance is not open to the public.

“We asked Lee Shackleford to focus on the Birmingham area, when he was writing the play,” said Phillip Ratliff, Director of Education at Vulcan Park and Museum. “So Birmingham is very much a character in this play as well as the city of Montgomery and Washington.”

Virginia Durr first aligned herself with Civil Rights cause in the 1930s. She was the wife of Clifford Durr, the attorney who represented Rosa Parks during the famous Montgomery bus incident and the sister-in-law of Justice Hugo Black.

“(Durr) was a fascinating, feisty and outspoken person who stood up to a lot of bullies in her day,” Ratliff said.

Loggins said that the evolution of Durr’s life is fascinating. Durr was a descendant of slave owners and evolved into a civil rights activist.

“The really interesting thing about her is the enlightening journey her life took. She went from someone who was brought up believing the KKK was an honorable organization to fighting for civil rights,” she said. “That’s what I find so thrilling about the play.”

Loggins referred to the play as “delightful and educational” and said she is thrilled to be to performing for students who may not know Durr’s story.

“(Shackleford) is really brilliant and I wouldn’t be doing this if it weren’t for him. I feel very privileged to have the chance to portray this brave and funny woman,” Loggins said.

The town of Vincent has completed a proposal master plan to give the Vincent Municipal park a facelift. (Contributed) By... read more