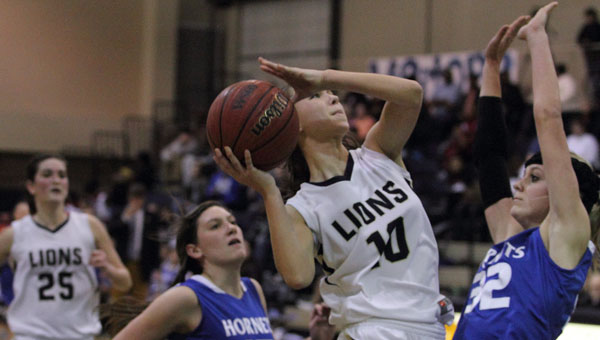 Lions’ coach Jim Brown believes it might be the most difficult championship game in his team’s four trips to the Class 5A, Area 7 tournament final, with a talented Sylacauga team waiting on Briarwood Christian in the title game Feb. 11 at 5 p.m.

“It’s going to be a challenge,” Brown said.

The Lions took care of their first test in the area tournament after racing out to a double-digit lead in the first half and holding off a run by Chelsea in the fourth quarter in the semifinal contest.

Amanda Mock led Chelsea (12-14) with 13 points, including nine points in the first half, and nine rebounds.

Wainwright knocked down a 3-pointer with 1:21 remaining in the first quarter to give the Lions a 9-4 lead after one period.

Briarwood Christian extended its lead to 14-6 after Wainwright drilled three free throws following a foul on her 3-point attempt with 4:28 left in the second quarter.

Chelsea cut the deficit to 14-11 following a three-point play by Mock with 2:59 left in the first half. However, Swords knocked down a pair of free throws with 7.6 seconds remaining in the second quarter, which capped a 7-0 run by the Lions and gave Briarwood Christian a 21-11 advantage heading into the locker room at halftime.

The Lions opened the second half with a 5-0 run, capped with a floater by Wainwright, to push their lead to 26-11 with 6:11 remaining in the third quarter. Briarwood Christian took its largest lead, 32-13, following a 3-pointer by Cutcliffe with 3:01 left in the third quarter.

Mock capped a 10-1 run by the Hornets midway through the fourth quarter with an offensive rebound and putback in the paint, which cut Chelsea’s deficit to 35-26 with 4:14 left in the game.

The Lions quickly pushed the lead back to double-digits before Marbut cut the deficit to 39-30 with 1:16 remaining after being fouled on a drive to the basket. However, Chelsea was called for its first lane violation of the season on the ensuing free-throw attempt, which hurt the Hornets’ comeback hopes.

Briarwood Christian, which knocked down 10-of-16 free throw attempts in the fourth quarter to account for all of its points in the period, finished 3-of-6 at the charity stripe in the final 1:01 to seal the win.

Chelsea coach Wayne Trucks said he was pleased with the Hornets’ effort in the fourth quarter.

“We had opportunities,” Trucks said. “We fought hard until the very end.”