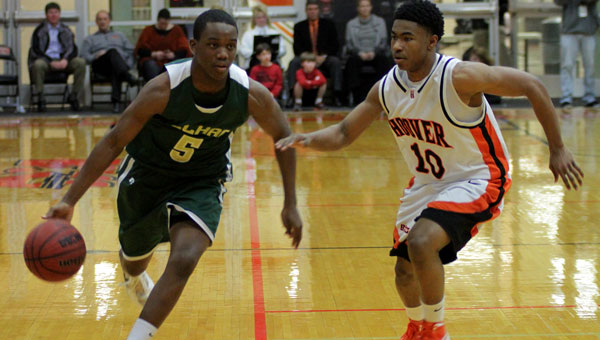 HOOVER — The Pelham High School boys’ basketball team was able to cut a 16-point second half deficit down to a two-possession game in the third quarter against Hoover in the Alabama High School Athletic Association Class 6A, Area 10 championship game Feb. 13, but the No. 5 Buccaneers responded in the final quarter to take the 75-51victory in the title matchup.

Pelham (16-12) trailed as much as 39-23 in the third period but turned things around on a big run midway through the quarter. The Panthers struck for a 10-3 rally capped off by a Trey Hurst 3-pointer from the right corner to bring Pelham to within eight, 44-36.

Friday night’s hero, Xavier Lacy, then brought the Panthers even closer with a dunk for two points, then a pass to Hurst on a fast-break basket to cut the score down to 46-40 with a minute left in the third.

The Bucs (28-4) were able to regain their double-digit advantage in the last minute with an 8-0 run to close the period for a 53-40 lead heading into the fourth.

“We made a nice run in the third quarter, then they answered it,” said Panthers’ head coach Joel Floyd. “They (Hoover) did a really good job of answering that run and making sure we didn’t make another one.”

Hoover used the momentum from the last minute of the third to begin the fourth with a 12-2 run for a 66-42 to put the game out of reach.

Brooks led the Panthers with six rebounds while Meadows accounted for a team-high four assists. Lacey and Williams each blocked three shots.

Hoover’s Brandon DeForie scored a game-high 17 points, 15 of which came in the first half. Deion Earl added 16 points for the Bucs with Eric Dansby adding eight points.

Pelham will travel to Mountain Brook in an AHSAA Class 6A sub-region contest Feb. 17, with the winner advancing to the Northeast Region tournament.

Thompson High School forward KaDeisha Stowes loses control of the ball on a drive to the basket in the Warriors'... read more