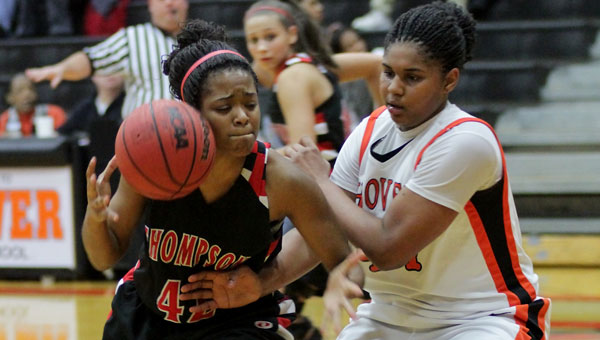 Thompson High School forward KaDeisha Stowes loses control of the ball on a drive to the basket in the Warriors' 75-18 loss to Hoover in the Alabama High School Athletic Association Class 6A, Area 10 tournament championship game Feb. 13. (Contributed/Eric Starling)

The Lady Bucs jumped out to a 19-4 lead after the first quarter, then extended their lead to as much as 30-6 late in the second period on an 11-2 run.

Thompson’s KaDeisha Stowes scored all six of the Lady Warriors (16-11) points in the second quarter including four down the stretch for a 34-10 Hoover lead at the half.

Hoover started the second half strong with a 7-0 run to capture a 41-10 lead with just under three minutes played in the third. Thompson’s Katie Guiser scored the lone points for the Lady Warriors in the period with a three from the right wing while the Lady Bucs closed the quarter on a 10-3 run to hold a strong 52-13 lead into the fourth.

Hoover closed the game with their best scoring period in the fourth tallying 23 points to take the 75-18 victory.

Thompson will travel to Mountain Brook in an AHSAA Class 6A sub-region game Feb. 16, with the winner advancing to the Northeast Region tournament.