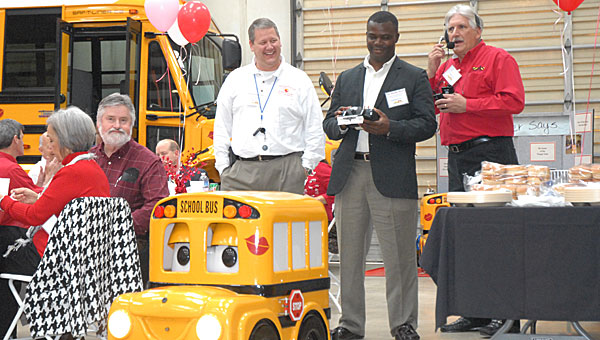 Transportation South employees and officials with the state Board of Education gathered in Pelham on Feb. 14 to show some Valentine’s Day love to bus drivers from dozens of school systems across Alabama.

During the second “Love the Bus” event, which was held at the Transportation South company’s building off McCain Parkway in Pelham, the company hosted a lunch for 42 school bus drivers from all over the state and rewarded them for their service to Alabama’s students.

“We are the state’s largest school bus dealer. This is just a way for us to give back to those who drive the buses,” said Transportation South President Bucky Law. “It’s a great way to recognize Alabama bus drivers who drive with their hearts.”

The event featured paintings created by Valley Intermediate School students through the school’s “why I love the bus” art contest, and a small obstacle course through which bus drivers navigated a small, remote-controlled school bus named Buster.

For St. John, the event served as a celebration of her 42 years as a full-time driver.

“It’s a world of difference (today). The buses now are amazing,” St. John added, noting she still substitute drives when needed. “I can’t retire cold turkey. When you’ve got a love like I do, you can just walk away from it.”

St. John said she often tried to mentor the kids on her bus, and tried to inspire them “to do their very best.”

“The 11th– and 12th-grade boys are my favorite,” St. John said. “If you treat them with respect, they will return that feeling to you.”

“You could not be on a safer vehicle than on an Alabama school bus driven by an Alabama driver,” Lightsey said, noting the number of accidents involving school buses decreased 10 percent from 2010-2011.

FROM STAFF REPORTS Eight high school basketball teams in Shelby County advanced to the sub-region round of the Alabama High... read more