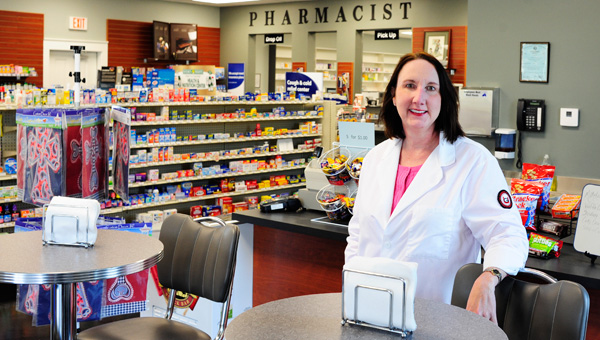 INVERNESS — When pharmacist Tammy Rogers decided to open an independent pharmacy in the Inverness area, she knew she wanted her business to go beyond dispensing drugs.

For inspiration, Rogers looked back to the independent pharmacy she began working in at the age of 15. That pharmacy boasted a soda fountain and sold gifts — two staples of Rogers’ Beaumont Pharmacy, located off Valleydale Road. Beaumont Pharmacy opened in October 2011.

“For me, it’s kind of the circle of life. I want to end my career here,” Rogers said.

“Our goal is to be unique. We don’t want to be Walgreens or CVS,” she said. “We want to build a relationship with our customers. I think customers today are hungry for the attention they don’t always get from the big box pharmacies.”

Rogers can help parents of small children — or four-legged ones —make sure they take their medicine.

Kids’ medicines can be flavored with such tastes as bubblegum, banana, cherry, raspberry, strawberry cream and watermelon, among others. Bubblegum is by far the most popular kids’ flavor, Rogers said.

Pets’ medicines can also be flavored with choices ranging from the savory, such as chicken pot pie, grilled tuna, angus beef and crispy bacon, to the sweet, such as banana bread, molasses or strawberry shortcake.

“I have two dogs myself, and I know how hard it is to get them to take their medicine,” Rogers said. “They’re my children because I don’t have kids. A lot of people don’t have kids, and their pets are their kids. They want to do what it takes to keep their pets happy.”

Path to titles set to begin