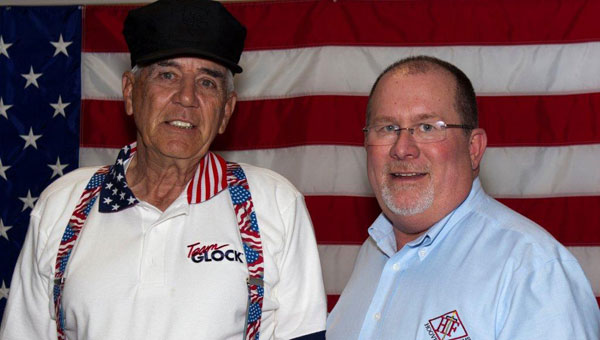 He was visiting Hoover Tactical and Firearms on Friday and Saturday, and wrapped up with a small group of local business men and women for dinner in Riverchase.

Though a highly decorated member of the United States Marine Corps, Gunny Sgt. Ermey is best known for the feisty characters he plays in movies and on television.

You may know him for his movie performances in The Boys in Company C, Apocolypse Now, Full Metal Jacket, Mississippi Burning, Fletch Lives, Dead Man Walking and one of the Batman movies to name a few. He has been in more than 60 films in all.

He was nominated for a Golden Glove Award for his performance as Gunnery Sergeant Hartman in Full Metal Jacket and served as an advisor on the film to one of the greatest movie directors of all time, Francis Ford Coppola.

He also advised Louis Gossett Jr. for his role in the award-winning movie, Officer and a Gentleman.

Among the television shows in which he has been seen include House, Scrubs, Miami Vice and The X-Files.

He has been the star host of The History Channel’s: Mail Call and Lock N’ Load with R. Lee Ermey.

Even your children know him as the voice of the plastic toy Army Commander, Sarge, in the three Toy Story movies or as various characters in Kim Possible, Family Guy, The Simpsons, X-Men 3 and Sponge Bob Square Pants.

He served in Vietnam and performed two tours of duty in Okinawa, Japan.

He served as a drill instructor at the Marine Corps Recruit Depot in San Diego, Calif., and Parris Island, S.C.

He was medically discharged for several injuries he incurred during his military service and received multiple commendations as well: Meritorious Unit Commendation, Marine Corps Good Conduct Medal and the Vietnam Gallantry Cross with Palm.

He was retroactively awarded the Drill Instructor Ribbon for his previous service as a Marine Recruit Training Instructor and the Vice Presidential Unit Citation for his service during the Vietnam War.

He has selflessly conducted morale tours visiting our troops abroad.

If Shelby County ever needs a Gunny Sergeant, I know where we can get a good one.

Michael Joe Moore’s watercolors can be viewed in museums, galleries, homes and other locations in several states, Canada and Europe.... read more