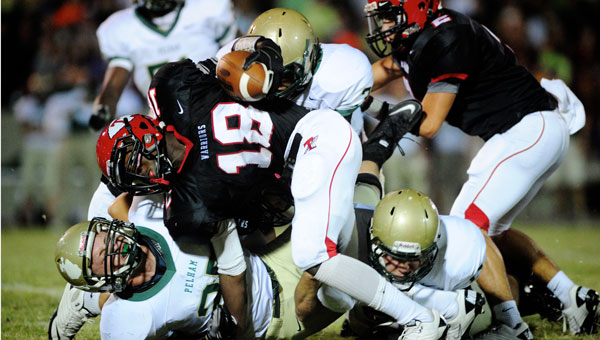 The Pelham High School football team will face rival Thompson earlier next season after the Panthers were moved into a new AHSAA region. (File)

Pelham High School football head coach Brett Burnett said he is looking forward to the “new challenge” a fresh slate of opponents will bring during the 2012 season.

After the 2011 season, the Alabama High School Athletic Association moved the Panthers from Class 6A, Region 6 to Region 4, removing from the schedule many opponents Pelham has played over the past several years.

Pelham will play its spring scrimmage on May 11 at home against Carver Montgomery, and will face a pre-season road trip at Tuscaloosa County Aug. 24.

On Oct. 12 and Oct. 19, PHS will face back-to-back road tests against region foes Prattville and Chelsea.

Pelham will round out the season with an Oct. 26 home game against region rival Spain Park High School and an out-of-region game Nov. 2 against Shades Valley High School.

All games and scrimmages are scheduled to begin at 7 p.m.

The 2012 schedule drops games against foes Homewood, Hoover and Mountain Brook, who the Panthers have played annually since 2008.