Relics from the past being gathered in Chelsea 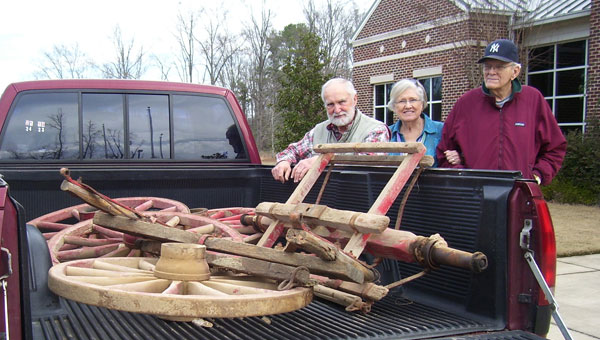 Early artifacts from the Chelsea area are being collected for a city museum. In the photo, Bob Wanninger (left), Juanita Champion and Wayne Champion have just arrived at City Hall after picking up wagon parts used on an early Chelsea farm. (Contributed)

The idea for a Chelsea museum had been batted around between Champion and Wanninger for several years, she told me. “We would say ‘That would be a good item to have in a museum. But we didn’t dream we would ever have space for one.”

A few months ago, however, the library moved from City Hall to a house across the parking lot, and Champion asked Mayor Niven for use of the vacated space for a museum.

“The mayor said yes, so Bob and I started collecting items,” she said. “The wagon wheels, axles and tongue are being loaned by Robert and Chuck Lewis. It was part of the working farm on which they now live.

“Jackie Boulware is loaning the stool that was used at the old train station, and some locks from it. We consider those real treasures.”

A sausage maker, corn sheller, hard-tack biscuit maker, wooden candle mold and crude seed-planting device are among the collected items. They would like anything depicting early life in Chelsea, Champion said. People’s names will be displayed with items they loan or donate. “We want tools, household items, transportation items, pictures…”

She would especially like to have pictures of the train station, other train memorabilia, antique clothing, family histories, Indian relics and histories, items from Weldon and Chesser stores, and from the sawmill, gristmill and blacksmith shop that were in Chelsea.

“Some elderly people have written their family histories,” she said. These and a recently written history of Chelsea’s incorporation will be available for reading.

Two antique display cases have been purchased and others are sought. Locked cases will be used to display a 1955 school annual and other old books, which are “too fragile to be thumbed through for examination.” Contents may be viewed on a computer set up in the museum.

“We want this to be an educational facility for adults and children who are interested in our city,” said Champion. “We hope that it will be interactive and interesting, and create an interest among the citizens.”

For more information, to contribute items, or if you have antique display cases for sale, contact Juanita Champion at jchampion@cityofchelsea.com or 441-1048.

Michael Joe Moore’s watercolors can be viewed in museums, galleries, homes and other locations in several states, Canada and Europe.... read more