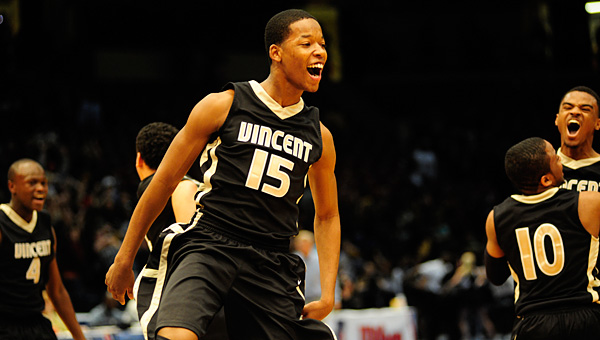 Vincent High School junior Anterio Rogers, who led the Yellow Jackets in scoring with 28 points in their victory over Lanett in the AHSAA Class 2A semifinals, celebrates with him teammates at the end of the game Feb. 28. (Reporter Photo/Jon Goering)

Rogers’ deft shooting skills provided late-game heroics and helped the Yellow Jackets hang on in the face of adversity to overcome a double-digit deficit in the fourth quarter in a 63-59 win over Lanett in overtime Tuesday night, which earned Vincent a berth in the Alabama High School Athletic Association Class 2A championship game Thursday night at the Birmingham-Jefferson Convention Complex.

Vincent (27-6), playing in the title game for only the second time in school history, will face undefeated Barbour County in the Class 2A championship game March 1 at 7:30 p.m.

Rogers knocked down big shot after big shot in the final minutes, which helped the 5-foot-9 guard and his teammates remain in the game emotionally after a potentially devastating set of circumstances in the second half.

Lanett erased a 10-point deficit and raced out to a 13-point lead but Rogers and his teammates came storming back to escape with an overtime victory, which sealed Vincent’s first trip to the AHSAA Class 2A title game since the 1980-1981 season. Vincent fell to New Brockton 82-55 in the Class 2A championship game in 1981.

“(Rogers) has so much heart,” said Vincent coach John Hadder. “His engine never stops. He just decided he wasn’t ready to go home.”