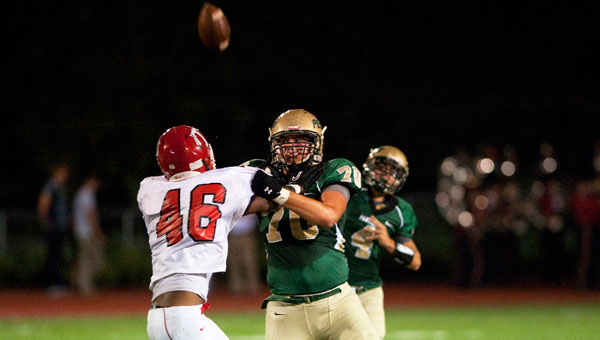 Pelham High School senior Justin Forehand was one of 12 high school football players in Shelby County to earn a Division I football scholarship this year out of 845 total players. (Reporter Photo /Jon Goering)

The odds were stacked against Pelham High School senior Justin Forehand among his Class of 2012 counterparts.

Statistics told him roughly less than one percent of the more than 7 million high school student-athletes in the nation this season would have their college tuition paid for through an athletic scholarship.

Forehand is one of the few thousand high school student-athletes who will earn a full ride through an athletic scholarship, which will cover all costs associated with attending college, including books, tuition and room and board, at a four-year institution in the Class of 2012. 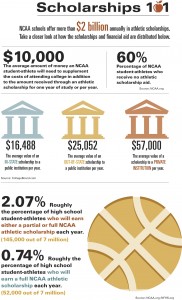 Tommy Forehand, Justin’s father, said his son is fortunate, but he also put in the extra time and effort needed to warrant a scholarship.

“It’s been a blessing that he got (a scholarship),” Forehand said. “He has worked really, really hard. Justin gets up at 4 a.m. for 5 a.m. workouts every day.”

In addition to time, money spent to help Forehand polish his athletic skills in football, baseball and basketball from an early age paid off with a full athletic scholarship to attend UAB and play college football for the Blazers at the National Collegiate Athletic Association (NCAA) Division I level.

While Forehand, a 6-foot-6, 275-pound offensive tackle, will attend college on a full athletic scholarship, each year several Shelby County student-athletes routinely sign “equivalency” scholarships, also known as “partial” scholarships, which may cover part of tuition and, or only, books.