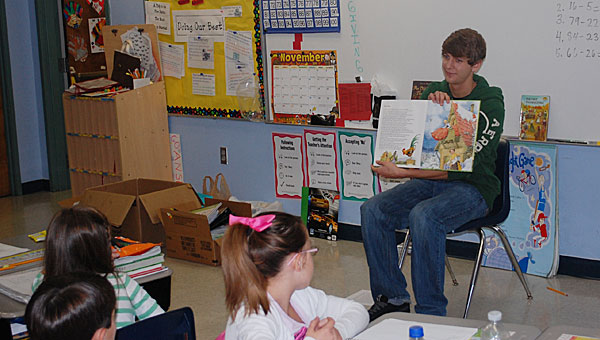 German exchange student Luc Grote, who is being hosted by the Wilson family in Helena, reads to his host sister's class at Helena Elementary School. (Contributed)

When German exchange student Luc Grote took his first sip of sweet tea after moving in with his host family in Helena last year, he was hooked.

“That was probably my favorite,” Grote said of the Southern staple beverage. “I had also never had apple pie or barbecue sandwiches before. There are a lot of things here that I can’t get in Germany.”

“Sweet tea is something he had never had,” said Grote’s host mother, Christi Wilson. “He was making about a gallon a day.”

Before the start of the 2011-2012 school year, Grote moved from Brunswick, Germany to the Wilson family’s home to spend a year studying abroad. Over the past several months, Grote has been learning about American culture while attending Pelham High School.

When he arrived in Helena, 17-year-old Grote said he was enthralled by the differences between Alabama and his home country.

“It’s a big difference. Everything is spread out here, and your neighborhood is not crowded,” Grote said, noting he was used to walking to school from his home in Germany. “You have to drive a little bit longer to get everywhere, so I guess that’s why so many Americans have cars.”

While here, Grote has gotten a chance to learn about Alabama’s roads firsthand through the PHS driver’s ed program – a program not available in German schools. The German driving age is 18, and the drivers test can cost “several thousand dollars,” he said.

“You can choose your own courses here. If you want to take art, you decide when you are going to take it,” Grote said. “In Germany, they say ‘You have to take these classes.’”

Grote, who plays on the PHS soccer team, said he was excited to learn about school-sponsored sports, which are not available in his hometown.

“In Germany, you have to join a club to play sports,” he said, noting he attended his first football game last fall. “I wish we (the soccer team) had so many fans like football has.”

The Wilson family has also learned much about German culture by hosting Grote, Wilson said.

“One thing I’ve learned is that they are very family oriented,” Wilson said, adding Grote’s family members are coming to visit Alabama before Grote returns home in June. “As an American family, we are focused on our computers and our video games and going our separate ways. Luc has kind of stepped in and pulled us back together.

Before Christmas, the Grote and the Wilson family observed a German tradition by celebrating “advent hour” each Sunday leading up to Dec. 25.

“During advent hour, you get together and read a story or share candy,” Grote said. “I wanted to bring some German culture to my host family.”

For Grote and the Wilson family, this year has served as an in-depth look at cultures on opposite sides of the globe.

“This is just something we’ve always wanted to do,” Wilson said of hosting an exchange student. “I think we’ve all learned a lot.”

To learn how to host an exchange student through the Program of Academic Exchange, visit Pax.org, or call Cindy Thigpen at 218-9429.