Oscar night at the Hampton 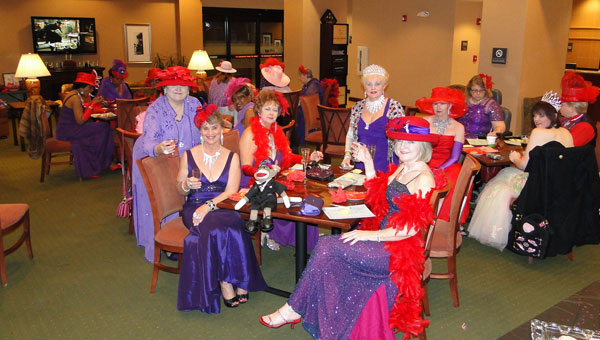 Red Hat Society chapter members across Alabama and three other states attended “A Night with the Stars” Feb. 25 at the Calera Hampton Inn to watch the 2012 Academy Awards. (Contributed)

Hollywood’s biggest night was just a few days ago.

While most people watched the Oscars sitting in their living rooms, 21 ladies representing more than a dozen Red Hat chapters from across our state, Kentucky, Ohio and Tennessee watched it from the lobby of the Hampton Inn. When they arrived for “A Night with the Stars,” the paparazzi was there to snap pictures as they walked the red carpet.

Red Hatters attend events and plan fun outings. Patty Miller, Her Majesty, The Princess, Ruler of Senior Rita’s dwelling in the Land of Margaritas, had wanted to do an Oscar party for several years. Last year she looked up the date for the 2012 awards ceremony and began planning.

“Invitations went out by mail, Facebook, email and the society’s event calendar,” Miller said. “We love to dress up — it’s all about us girls tonight.”

The hatters enjoyed a buffet of food and drinks. They entered a door prize drawing and received nominee ballots to guess the Oscar winners. Awards went to four ladies who had four of the six categories voted correctly.

Awards also went to four ladies who got none right. Each made an acceptance speech.

“I’ve never gotten an award for getting a zero,” Shirlene Epperson of the Senior Rita’s said.

Karen Stamps of the Laid Back Lady Hatters serves as an ambassador of the Red Hat Society. She said ladies can join a chapter, but also be a support member of other chapters.

“I’m Queen Karen Southern Yankee of the Laid Back Lady Hatters, but I support the Senior Ritas, and my title is Madame Yankee.”

More information about joining a chapter is at Redhatsociety.com.

Calera girls learn to be princesses