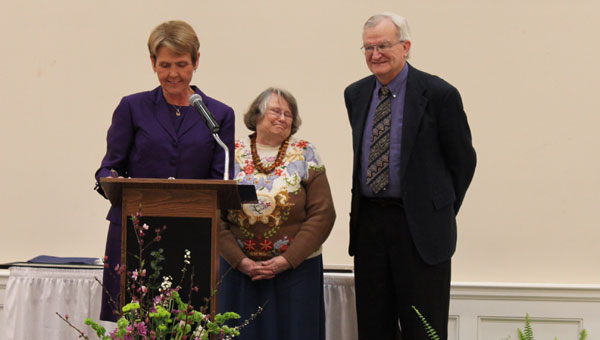 The banquet, which was sponsored by the Montevallo Chamber of Commerce, was held in Anna Irvin Hall at the University of Montevallo.

The first awards were presented by the three Montevallo public schools.

“She does anything I need her to do. She does it energetically,” he said. “She personifies what we want people to see when they come to Montevallo High School.”

He then named Perry Lawley as MHS’ Teacher of the Year.

Barbara Broadhead was given the AAUW Pathfinder Award by Faye Roberts.

The Shelby Emergency Assistance Volunteer of the Year was Herschel Hale, who Kimberly Barrett said is a true “Renaissance man” when it comes to volunteering with the SEA.

Joe Williams, chairman of the Boys and Girls Club of Montevallo advisory council, presented the club’s Partner of the Year Award with four children from the club. They award UM President John W. Stewart Jr. with the award, as he and the university partner with the club.