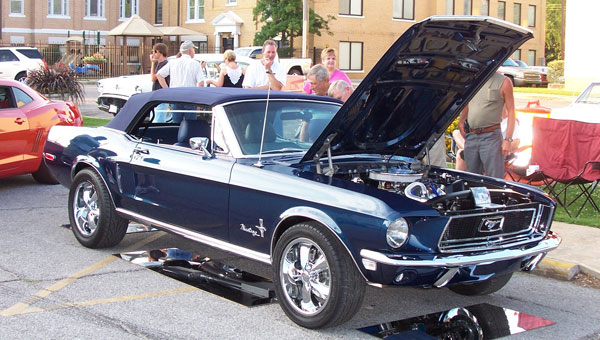 The 1968 “fixer-upper” that Lex Boroughs of Chelsea and his brother, Roy, turned into a show car. (Contributed)

When Roy Boroughs bought a 1968 Ford Mustang convertible in the mid-1990s, it was in rough condition. The motor needed rebuilding and it had lots of rust, dents and dings.

In the words of Kym Boroughs, his brother Lex’s wife, “It needed lots of TLC,” which it eventually received from the brothers. And a few weeks ago, the blue Mustang took first place in the Custom Convertible class of the 41st Annual O’Reilly Auto Parts World of Wheels in Birmingham.

Kym said she helped pick out the color of the convertible top and the leather for the interior. But she mostly stayed out of the way while they worked on it.

“But I’ve been to every show it’s been in from small, community shows in Montevallo and Jemison to the AutoRama in Detroit,” she said, adding that they had also shown in Chattanooga and Atlanta.

At a show like World of Wheels, the judges come around at night or early morning, when no one is there, Kym said. “You are always on edge, knowing they are coming around and you aren’t there. … You know you are up against other cars that took just as much money and time as yours, if not more.”

Then, when you win, there’s a real “adrenaline rush,” she said. “These shows are probably some of the most fun I have ever had. I am so proud of Lex and Roy.”

The brothers also received an Outstanding Display award at World of Wheels.

The display is a 20 foot by 20 foot octagon, built of chrome piping and PVC pipe painted the color of the car, Lex said. Eight light bars around the bottom of each section help show the car at its best. Mirrors show the underside. “We wanted people to see everything possible,” Lex said.

Lex, a quiet, unassuming fellow, said he has always been interested in cars. He’s always worked on his own automobiles and fixed them. Helping his brother rebuild the Mustang was a once-in-a-lifetime chance for him, he said.

“The car wasn’t supposed to be anything but a fixer-upper, but once we got started, we couldn’t stop,” Lex said.

The brothers installed the car motor, which a friend rebuilt. Everything else, except painting the outside the original Presidential blue and customizing the interior, they did themselves.

Later this month, they will show in a Mustang-only show in Pensacola, Fla.

Shelba Nivens can be reached by email at Shelbasn@juno.com

Gearing up for Easter in Chelsea