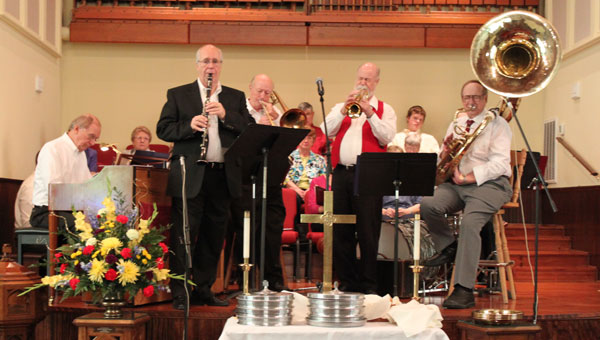 MONTEVALLO – The sounds of brassy jazz emanated from the First United Methodist Church in Montevallo on March 11.

The jazz communion services began in 1990 after Dr. Mike Mahan, a Brierfield dentist, took a trip with his wife on the Delta Queen Steamboat in the 1980s. The Mahans met jazz pianist Jean Kittrell on the boat, and jazz communion concept grew from the friendship.

The rhythms transferred to religions music, he said.

“The songs they started with were hymns,” Mahan said, “and hymns are taken from Scripture.”

The jazz band on March 11 was made of Chuck King, Ron Rooks, David Thomas, Ed Robertson, David Langford, Stuart Thompson and Red Lehr, who put their own twist on traditional hymns.

Lehr, who traveled from St. Louis, Mo. for the service, is touted as the “world’s greatest tuba player,” Mahan said.