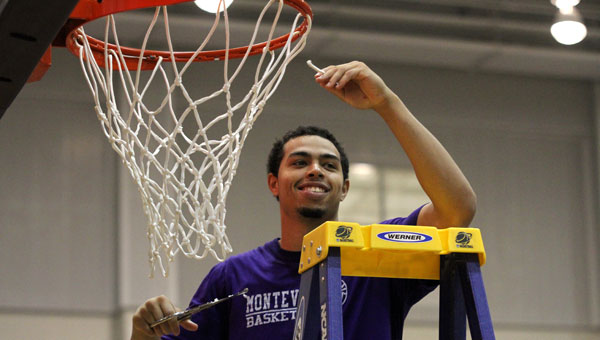 MONTEVALLO — University of Montevallo senior guard D.J. Rivera isn’t lacking confidence and plays with a chip on his shoulder.

The combination of those two character traits paid off for the Falcons this season, with the NCAA Division I transfer from Binghamton University dominating his adversaries in Division II.

“I feel records are made to be broken,” Rivera said. “I feel like all of my hard work has paid off.”

Rivera, who was selected as a first team All-Peach Belt Conference pick, was named the Southeast Region tournament’s most valuable player, but it mattered little to the 6-foot-4, 200-pound Philadelphia, Pa., native.

Rivera, who was snubbed as the America East Conference Player of the Year despite being widely regarded as the best player in the Division I conference two seasons ago at Binghamton, isn’t concerned about individual awards with a trip to the Elite Eight at The Bank of Kentucky Center in Highland Heights, Ky. awaiting him and his teammates.

The Falcons will meet Metropolitan State College of Denver, Colo., the winner of the Central Region tournament, in the quarterfinals March 21 at 7:30 p.m.

University of Montevallo players and fans converge at midcourt following the Falcons' 61-60 win over Lincoln Memorial University in the... read more