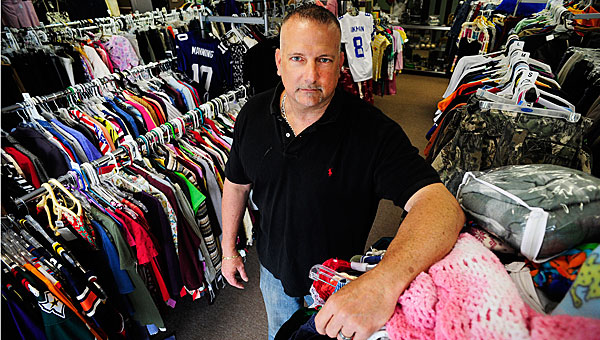 In the about eight months Alan Adelberg has been operating the Next 2 New Thrift Store in Alabaster, he has sold everything from a mounted ram’s head to a Street Fighter II arcade cabinet.

“We have some unique items in here,” Adelberg, a 1980 Thompson High School graduate, said with a laugh. “People will come in and say they have never seen a thrift store like this before.”

Adelberg, who previously worked in retail sales in a Walmart automotive department and later became a general manager with Havoline Oil, opened the thrift store at 1123 First St. N. in July 2011.

During his time in retail sales, Adelberg said he “developed a passion for buying and selling,” which led to his decision to open his own business. When he began looking for potential locations for his business, the thought of opening it anywhere but Alabaster never crossed his mind.

“I wanted to keep it close to home,” Adelberg said, noting his oldest son is on the THS wrestling team, and his 4-year-old son is starting to get involved in city sports. “I wouldn’t have it any other place but Alabaster.”

Today, the 2,400-square-foot shop is filled to the brim with everything from video games to porcelain dolls and used clothes. Adelberg said he tries to stock his store with items not found in similar shops.

Walking through the doors of Next 2 New reveals a store filled with pocket knives, comic books, many sports memorabilia items, video games and several other types of items.

“We try to bring in some of the nicer stuff, but we do want to keep that thrift store feel,” Adelberg said. “With the video games, I try to research and seek out good items and price them accordingly.”

Adelberg said the store receives some donations, but he typically seeks out and purchases many of the items in his inventory. He said some of the most memorable items he has brought to the store include a 1950s baseball glove from Western Auto and a slot machine.

The store conducts about 10 silent auctions each week inside the store, providing a “unique” twist on the thrift store experience, Adelberg said.

“Right now, we are looking to relocate to a bigger space elsewhere in the city,” Adelberg. “We went with a different model than a lot of thrift stores, but I guess it’s been working.”

FROM STAFF REPORTS Ever since the economic decline of a few years ago, officials in each Shelby County municipality have... read more