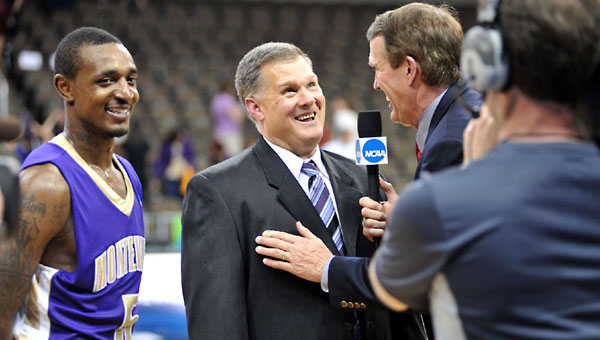 University of Montevallo senior guard D.J. Rivera shined in the national spotlight on CBS two years ago during his former school’s matchup with Duke University in the first round of the NCAA Division I men’s basketball tournament.

Rivera, then a standout sophomore at Binghamton University, led the Bearcats with 20 points in a 86-62 loss to the Blue Devils in Greensboro, N.C. in primetime on national television.

Rivera, a nephew of the late Loyola Marymount University star Hank Gathers, will be back in front of a nationwide television audience March 24, this time carrying his first-year teammates from Montevallo with him in the NCAA Division II national championship game at The Bank of Kentucky Center in Highland Heights, Ky. The Falcons will compete in their first ever national championship game in any sport Saturday.

The All-American from Philadelphia, Pa., who began his career at Division I St. Joseph’s University in his hometown, said neither of his experiences at his previous schools compare to his time in Montevallo during the Falcons’ run to the national championship game.

“This is the highlight of my career,” Rivera said after leading Montevallo to the Southeast Region tournament championship a week ago.

Rivera helped Montevallo reach the championship game with his game-high 23 points in a 79-72 win over defending national champion Bellarmine University in a semifinal contest March 22.

Rivera has teamed up with fellow senior guard Antoine Davis to comprise one of the best backcourts in the nation. Davis, who lifted the Falcons to a win in the Southeast Region tournament semifinals on a runner in the lane March 11, added 12 points in the semifinal win. Davis missed a majority of his senior season with a broken bone in his leg.

Rivera and Davis have combined to average more than 32 points per game this season. The pair of senior guards are the only two Montevallo players averaging double figures in scoring.

Rivera leads the team with his 20.8 points per game average. Davis is averaging a team-high 4.9 assists.

Rivera and Davis left a mark on their latest opponent in the Falcons’ 79-72 win over the defending national champions March 22.

Bellarmine coach Scott Davenport also praised post players Drico Hightower and DeMarcus Catchings, the nephew of former University of Tennessee women’s basketball standout Tamika Catchings. Hightower chipped in 13 points in the semifinal win, while Catchings provided a spark off the bench with his defense and rebounding.

Davenport added his name to the list of Montevallo admirers following the game.

“We lost to an incredibly talented basketball team,” Davenport said. “A well-coached team. A very solid team,” Bellarmine head coach Scott Davenport said. “They were tremendous on the backboard. They presented great quickness problems for us. We wish them the best Saturday afternoon.”

The University of Montevallo is organizing a bus caravan to carry fans to the national championship game, which is scheduled to tip off at noon.

Fans wishing to grab a spot on the bus are being asked to arrive no later than 11:30 p.m. tonight at the McChesney Student Activity Center. The buses will depart at midnight.

To make a reservation on the bus caravan, contact DeAnna Smith at dsmith23@montevallo.edu.

Fans traveling on their own looking for a hotel are encouraged to stay at the Holiday Inn Cincinnati Airport. The hotel is offering a $99 per night rate to Montevallo fans who offer the password “Montevallo” when booking a room. For more information, contact Molly Fruin at (859) 746-5612.

Tickets to the game are $15 each. Tickets for students, seniors and children are $12 each.

University of Montevallo senior guard D.J. Rivera waits for a teammate to set a pick in the Falcons' 79-72 win... read more