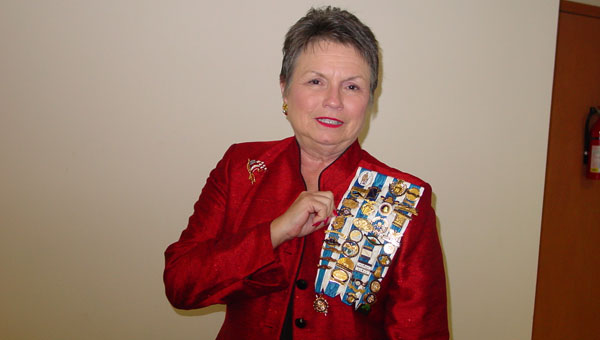 Rita Reid points out the many medals and pins she has earned through her work with the DAR. (Contributed)

Everyone who knows Rita Reid knows that she is a strong, determined and tenacious lady, and it would be no surprise that for the past six years she had been the very successful regent of the local David Lindsay Chapter of the Daughters of the American Revolution.

Fellow chapter member Phoebe Robinson said, “Rita has been an incredible regent. She has led the David Lindsay Chapter through a period of unprecedented growth as well as receiving recognition at the state level through many awards. Our chapter is thriving thanks to her invaluable leadership.”

Rita protested, giving all of the credit to the other chapter members. “Our members are amazing; they are really responsible for the growth. They have spread the word about the DAR and, with the help of our registrar, brought in the new members.”

As a new member of the DAR in 2004, she joined the David Lindsay chapter. She has served in various capacities including chapter secretary, flag chairman, and chapter vice-regent. On the state level, she served as the American Heritage chairman, and as central district chairman of the DAR good citizen essay contest.

DAR is a lineage society that is non-profit and charitable. It is an organization dedicated to patriotism, historic preservation and education. Its motto is “God, Home and Country.” Membership is open to any woman 18 or older who can prove lineal descent from a patriot of the American Revolution. A patriot is defined as one who provided service or direct assistance in achieving American independence.

The national society of DAR was founded in 1890, the Alabama society in 1894, and the David Lindsay Chapter in 1927 in Montevallo; later meetings were moved to Columbiana.

The local chapter was named for Private David Lindsay who fought in the war and moved to Shelby County in the early 1800s. He and his family are buried in the Lindsay historical site on Shelby County 17 in Maylene.

Along with its many years of actively supporting the projects befitting the objectives of the DAR; the local chapter of 50 members lists among its accomplishments the placement of a memorial plaque at the Lindsay cemetery, and the installation of a rock and a DAR memorial and historical marker at The American Village honoring David Lindsay.

Rita Reid’s achievements as a DAR leader mirror her life as a wife and mother.

She and husband, Bill, raised four fine sons (triplets plus one). Son Mike described Rita as a good mother, very loving, but firm. For example, she insisted all of them learn to operate three machines before they could get their driver’s licenses; the washer, the clothes dryer and the stove.

To learn more about the DAR, go to Dar.org.

Catherine Legg can be reached at clegg2@bellsouth.com.