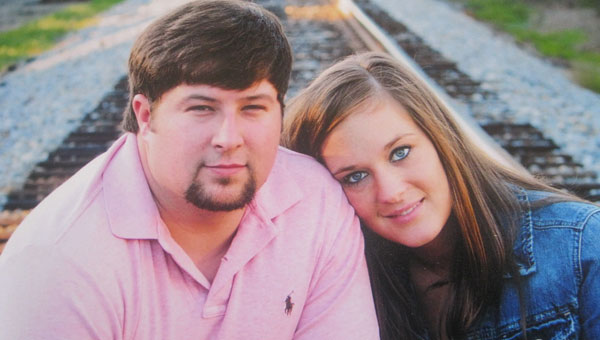 Paul Jeffreys and Kim Posey of Muscle Shoals and John and Sandra Roberts of Calera are pleased to announce the engagement of their children Leann Jeffreys and Justin Roberts.

The bride-elect is the granddaughter of Thomas Posey, Hazel Posey and Mary Lou Posey all of Leighton and the late Leslie and Marie Jeffreys. She is a 2006 graduate of Muscle Shoals High School. She is a 2010 graduate of the University of North Alabama where she received a degree in Marketing. She is employed with Sheffield Specialty Pharmacy.

The future groom is the grandson of Charles and Betty Alverson and Donald and Evelyn Roberts all of Calera, Alabama. He is the great-grandson of the late Willie Mae Franklin also of Calera. He is a 2002 graduate of Calera High School and is currently employed with IBEW Local Union 136.

An April 21, 2012 wedding is planned. After a honeymoon in Jamaica, the couple will reside in Muscle Shoals.

Fievet-Crawford Aaron and Brenda Lively and Neil Fievet are proud to announce the marriage of their daughter, Coni Fievet of... read more