Learning to parent at a young age 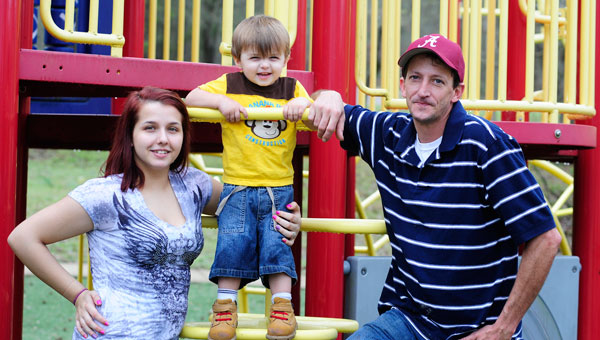 Raven Allen and her son, 2-year-old Carson, have an outing with her father, Glenn Allen. (Reporter photo/Jon Goering)

Sixteen-year-old Raven Allen chased her 2-year-old son, Carson, around the playground in Helena and shouted encouragement and warnings as he played. The duo was under the watchful eye of Glenn Allen, Raven Allen’s father, as he spoke of how he felt when his then 13-year-old daughter told him she was pregnant.

“We’re blessed to have Carson, but he just came a little early,” Glenn Allen said. “I’ll be there for her in any way I can.”

Glenn Allen is the father of three girls, and always wanted a son. Raven is his middle daughter, with a 24-year-old sister and a younger sister, who is 11 and lives with Raven and their father.

“I wanted a little boy, but I knew God wasn’t going to bless me with one. I guess I have one now,” he said, speaking of Carson.

Raven Allen was attending Helena Middle School when she found out she was pregnant.

“I was in the eighth grade. I was a little kid,” she said. “I didn’t want to be sexually active, but I was in a relationship with an older guy.”

When she became pregnant, Raven Allen said her boyfriend, who was 16, asked if she had thought about an abortion. Allen refused to have an abortion, but considered adoption at one time.

“I sometimes think maybe he could have more (if he were adopted), but he never goes without,” she said, noting she and her family sacrifice to provide for Carson.

“My dad helps me so much,” she said. “Some girls aren’t as lucky. When I see them, I reach out to them as much as I can.”

Glenn Allen takes his youngest daughter to school, then Raven to Pelham High School and Carson to daycare most mornings.

“She does very well under the circumstances,” he said. “She just needs guidance to guide.”

By CHRISTINE BOATWRIGHT / Staff Writer We all make mistakes, but most mistakes fade over time. When I started digging... read more