Learning to parent at a young age

Amber Shaw made As and Bs in school and played volleyball for Vincent High School. She never expected to have to tell her parents she was pregnant at 16.

“I hate that I’m one of the statistics,” she said. “I was one the teachers loved. Now they look at me and say, ‘She’s the one who got pregnant in high school.’”

Now 19, Shaw lives with her parents and her 2-year-old son, Aden, in Harpersville.

“I couldn’t live without Aden now, but life would be totally different than it is now,” she said. “I wish I would have been smarter.”

Shaw graduated from Vincent High School in spring 2011. She currently attends college classes at the University of Montevallo while working 40 hours a week as a staffing assistant in Homewood. 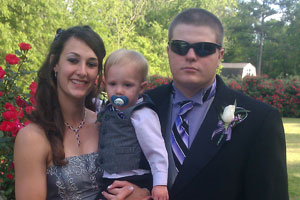 Amber Shaw and Andrew Gardner with their son, Aden Gardner, before the Vincent High School prom in April 2011. (Contributed)

“You just have to keep your head up,” she said. “I made a mistake, a bad decision. I have to choose other dreams. I wanted to go to a big university, live on campus and have the college experience.”

Shaw credits her parents for her early parenting success with Aden.

“I probably wouldn’t have made it without my parents. Truthfully, they raised him his first year,” she said.

In addition to parental support, Raven Allen and Shaw both found guidance from Carolyn Locke, who facilitates the Shelby Teens for Effective Parenting Program for Shelby Emergency Assistance. Locke meets with Allen twice a month at Pelham High School to offer parenting education and support. She met with Shaw while she was in high school.

“I wouldn’t have been near as informed if I hadn’t been in the STEP Program,” Allen said. “(Locke) came with me to my third doctor’s appointment. She was really supportive and asked me how everything was looking.”

The STEP Program is available to pregnant or parenting teens ages 12 through 19 who are Shelby County residents.

“I do not promote teen pregnancy, but I do support and advocate for parenting teens,” Locke said.

By CHRISTINE BOATWRIGHT / Staff Writer We all make mistakes, but most mistakes fade over time. When I started digging... read more