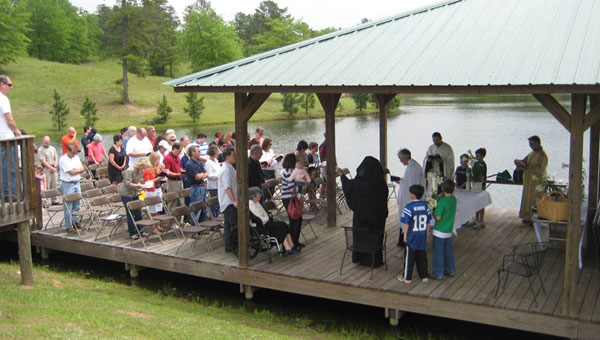 Members of the Holy Cross-Holy Trinity Greek Orthodox Cathedral gather in Harpersville at Camp Vakakes for their Pascha, or Easter, service. (Contributed)

HARPERSVILLE — “Christos Anesti” or “Christ is risen” is a traditional greeting among Greek Orthodox Christians during their Pascha, or Easter service.

“One person says ‘Christos Anesti!’ or ‘Christ is risen!’ and the person with the other egg responds with ‘Alithos Anesti!’ or ‘Truly he is risen!,’” said Father Paul Costopoulos.

Unlike other churches in the area, the Holy Trinity-Holy Cross Greek Orthodox Church will celebrate Easter on April 15.

The church will have its Pascha service and a Greek picnic at Camp Vakakes in Harpersville starting at 11 a.m.

While many other denominations will color Easter eggs colors such as purple, blue, pink or green, Greek Orthodox Christians will color their eggs red. 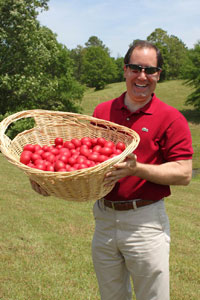 Costopoulos described a Greek Orthodox tradition involving the breaking of the red eggs. Celebrants hit their egg against another’s and exchange the traditional Easter greeting of “Christos Anesti” and “Alithos Anesti.”

Costopoulos said Easter is perhaps a more festive day than even Christmas itself.

“The date is usually the first Sunday following the first full moon in spring after the Jewish Passover,” Costopoulos said. “Every four or five years we celebrate together with other churches.”

The Greek Orthodox Church uses the Julien calendar to calculate the date of Easter every year.

The church purchased a 40-acre property in Harpersville to use the grounds for fellowship events. Costopoulos said the church bought the property five to six years ago and are in the process of building a picnic pavilion and possibly a chapel.

“It was a dream of the community to have a place where we could gather for picnics and youth events and other things,” he said. “We found the property in Harpersville, and we fell in love with it.”

The Agape vespers service, also known as the love service, is a continuance of Pascha and will be held at the boathouse on the property. Afterwards the church will share an Easter meal, which typically consists of lamb, potatoes, salad and dessert.

The Agape service is conducted in multiple languages and scriptures are spoken to symbolize the dissemination of the resurrection of Christ to all the people of the world.

“There is fellowship among everyone and games for the children,” Costopoulos said. “The day breaks up around 4:30 p.m. for families to attend additional events and other festivities.”