More believing in the power of writing 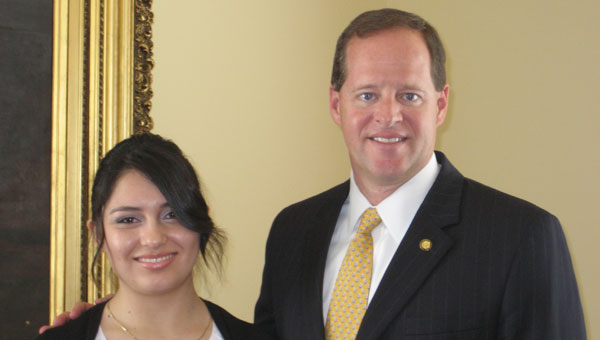 “All the buildings are so white,” Pelham High School senior Scarlett Lara-Alcantara said as she admired Montgomery. Last week, while Shelby County Schools were on spring break, Lara-Alcantara and I were making our way to the Alabama High School Literary Arts Awards Ceremony in Montgomery.

Lara-Alcantara’s award was for nonfiction. Her essay was about Alabama’s newest immigration legislation. Lara-Alcantara has a visa authorizing her to be in this country; however, many of the people she loves are undocumented.

“I am able to have one of the greatest blessings of all – freedom to live in the United States,” she said.

While Lara-Alcantara is delighted to be living legally in this country, she longs to find a solution for others who are undocumented.

“This new legislation is not black and white. It puts all undocumented immigrants at the bottom of the food chain with no recourse if someone hurts them, steals from them or abuses them,” she said.

Lara-Alcantara wants to go the University of South Alabama. After she graduates from South, she wants to go on to law school.

“Becoming a lawyer is only the beginning of my life’s journey,” she said. “My struggles have led me to have a passion for law, and those same hardships have filled my heart with the desire to help other families and children.”

Because she is here on a visa, most scholarships are unavailable to this outstanding student and she is denied in-state tuition. Scarlett’s other teachers and I have taught her that writing is powerful — and that writing can change hearts.

The fact that Lara-Alcantara was one of the winners in the Alabama High School Literary Arts Awards allowed her to make her first trip to Montgomery. Photographing Sen Cam Ward, R-Alabaster, congratulating Lara-Alcantara, I had the sense that I was seeing into the future.

One day, I expect that this young woman will return to Montgomery to find a way that our state can reward scholars willing to work diligently with affordable college educations — without regard to citizenship status.

Alabama Writer’s Forum Executive Director Jeanie Thompson told the students that the only way they could get to this awards ceremony was “by their own merit.”

Applauding as Lara-Alcantara received her award, I hoped that she will be rewarded for her merit and her hard work with the scholarship that she needs.

Connie Nolen can be reached at CNolen@Shelbyed.k12.al.us.

Karen Mitchell, center right, stands to the right of her team, which includes teachers and students. Mitchell operates a Taekwondo... read more