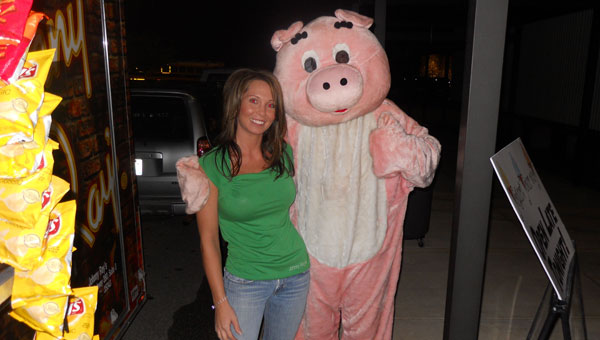 “I wanted to open a restaurant because I wanted a job where I could work with my family,” Miranda Carter said.

So she opened Johnny Ray’s in Chelsea, and last week celebrated its eighth anniversary.

“My brothers started working with me when I opened,” she said, “and my mom helps on weekends. I would not be where I am today without help from my two brothers, Jeremy and Alex.

“Alex passed away two years ago, but he left a big impact on my restaurant. He was always our pig mascot and left us with some wonderful memories.”

She also has a wonderful staff, Carter said. Some of her employees have been with her since she opened “and that is huge in the restaurant industry.”

Another reason for wanting a restaurant, said Carter, was the freedom to be off work to participate in civic organizations she is involved in. These include Key Club coordinator for Chelsea Kiwanis, chair for the American Cancer Society Relay for Life, the Chamber of Commerce board and Leadership Shelby County.

Their newest venture at the restaurant is a “mobile Johnny Ray’s” that her brother created, she said. “We travel all over Birmingham catering events.”

They have also extended their menu to cater rehearsal dinners and weddings. “It has been so much fun to design our new catering menu and prepare the new menu items at weddings,” she said.

Carter graduated from Pelham High School, went to the University of Montevallo for a year, then to UAB where she studied business management. She was owner of Yogurt Your Way for two years before Johnny Ray’s.

“I moved from Pelham to be closer to work and to live in this wonderful community,” she said. She has a daughter, Juliana Swinford, who is 5 and attends Chelsea Park Elementary School.

During Johnny Ray’s anniversary week, March 26-30, they had menu specials every day, children ate free all week and could have their pictures made with the pig mascot. “But kids eat free every Tuesday, and we have daily specials every week,” Carter said.

Her late brother Alex watching down on her and brother Jeremy is truly their inspiration and motivation to be as successful as they can be and have fun while doing it, she said.

“We strive to make him proud.”